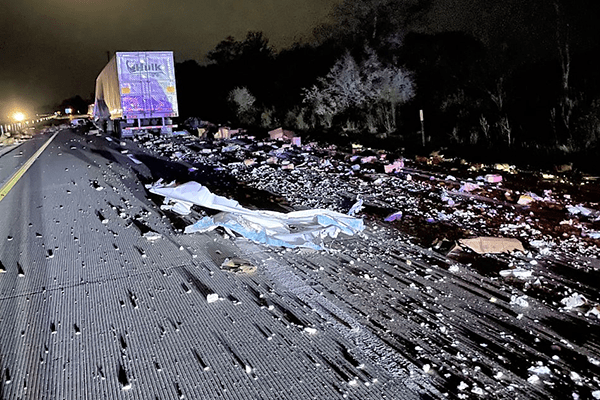 Van Buren County Sheriff Daniel Abbott reports deputies were dispatched to west bound I-94 near the 45mm in Hartford Township early Thursday morning after a report of a traffic crash involving two semi-trucks.

Deputies from the Van Buren County Sheriff’s Office Uniform Response Division arrived on scene to a massive debris field covering both west bound lanes, spread over an area of approximately 300 yards, according to Abbot.

There were no injuries reported and the spilled cargos posed no danger to the public.

According to the involved parties, one truck had experienced some mechanical issues, prompting the driver to pull off on to the shoulder of the highway to investigate. While out of his truck, a passing semi clipped the rear corner of his trailer as it drove by, ripping away the sides of each truck’s trailer and causing both to lose their respective cargos upon the roadway.

Both lanes of west bound I-94 were closed for approximately 5 hours as clean-up crews worked to remove the trucks, cargo and debris from the roadway.