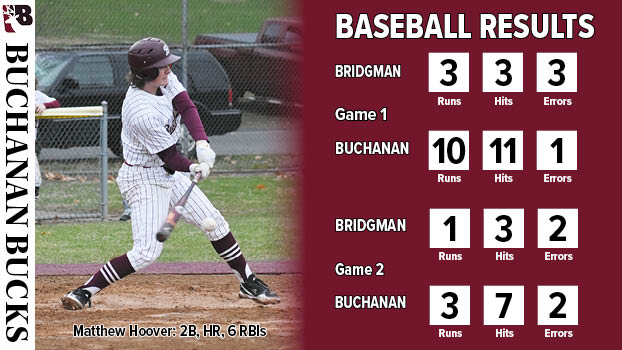 BUCHANAN — Wednesday night’s BCS Athletic Conference Red Division battle between Bridgman and host Buchanan was not only for first place in the league, but is a potential preview of the Division 3 District Tournament next month.

For now, the No. 2-ranked Bucks will have to settle for the sweep of the No. 9-ranked Bees. Buchanan (13-2) defeated Bridgman 10-3 and 3-1 to remain atop of the Red Division standings.

Bucks’ Coach Jim Brawley said that these two games showed just how tough it will be when the postseason rolls around.

“This match-up confirmed we have one of the most competitive districts in the state,” he said. “It proves we have to play at our very best to win. We must get better at this point. We have to be able to get bunts down, can’t make outs on the bases, and pitchers have to get strike one.”

Buchanan senior Matthew Hoover was a one-man wrecking crew in the opening game Wednesday. Hoover tossed a three-hitter with six strikeouts, while at the plate, he had three hits, including a double and a home run, while driving in six runs.

Drew Glavin and Macoy West both had two hits.

In the nightcap, Drew Glavin tossed a three-hitter for the Bucks.

Murphy Wegner led the Bucks’ offense with a single and a double. Buchanan also got doubles from Cade Preissing and West.

The Bucks returned to the diamond today to host Mishawaka in a non-conference contest.

The focus remains the same for the No. 6-ranked Buchanan softball team.

The Bucks know that in order to be successful not only in the BCS Athletic Conference’s Red Division, but the postseason as well, it will need to get solid pitching, timely hitting and play good defense.

The Bucks put all that on display Tuesday in its sweep of visiting Bridgman in their Red Division showdown.

In the opening game, Hailee Kara tossed a four-hitter with 10 strikeouts. The Bucks had nine hits in the contest and committed just one error.

Camille Lozmack, Alea Fisher and Alyvia Hickok each had two hits for Buchanan.

In the second game, Lozmack scattered five hits, while the Bucks had 14 hits.

“The Bee’s came out swinging against us and had a really solid defense, so I was happy with how we responded to their attack,” said Buchanan Coach Rachel Carlson. “We continued to put runners in scoring position and our hitters came through when we needed them. We believe in each other and that is helping us in adverse situations. Proud of how we fight and stay tough in our quest to win the BCS Red title this year.”

Buchanan are back in action today as it hosts Kalamazoo Christian in a non-conference doubleheader.