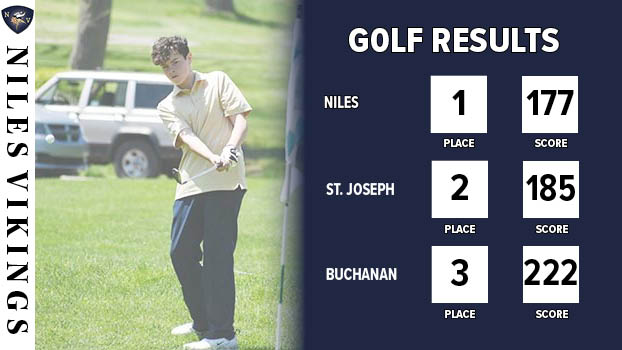 BUCHANAN — A busy week for the Niles golf team continued Tuesday as the Vikings defeated St. Joseph and host Buchanan in a non-conference tri-match at Orchard Hills Country Club Tuesday.

The Vikings, who were coming off of their successful defense of the Leader Cup Monday, shot 177 as a team, led by co-medalist Evan Bruckner’ 42.

Buchanan was led by Aiden Mondschein’s 45. Carson Sheltonj (54), Nick McKean (59) and Tyler Miller (64) comprised the four scores the Bucks counted toward their team total of 222.

The Bears finished with a 185.

Buchanan was back in action today as it competed in the BCS Jamboree hosted by Brandywine at Plym Park. Niles returns to action Thursday as it travels to Dowagiac to take on the Chieftains in Wolverine Conference play.

Harrison Smith’s 45 earned medalist honors for the Eddies, who also got a 46 from Andrew Kurowski, a 47 from Landon Putz, a 50 from Ethan Emenaker and a 51 from Will Moore.

The Eddies were back on the links today as they headed to Sturgis for a Wolverine Conference match. Edwardsburg hosts Paw Paw Thursday in a league match.