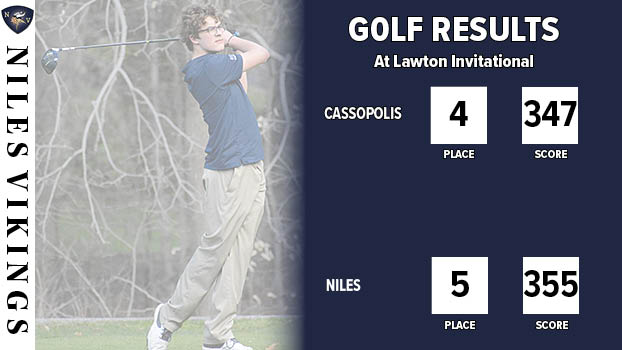 Mattawan won the team championship as it shot 301, led by medalist Matthew Novak.

Cassopolis finished fourth and Niles fifth in the team standings with scores of 347 and 355, respectively.

It was the second straight day of tournament competition for Niles, which also competed in the Sturgis Invitational at Klinger Lake Golf Club under less than ideal conditions Friday.

Kalamazoo Hackett won the team championship with a score of 336, while Niles finished fourth with a 372.

Sturgis’ Hayden Goodman earned medalist honors with an even par 72.

The Rangers were led by Logan Pflug, who shot 82. Kendon Williams and Brayden Westrate both shot 87, while R.J. Drews finished with a 91, Kenny May a 97 and Collin Bogue a 103.

Cassopolis and Niles will both compete in the Leader Cup at Orchard Hills Country Club starting at 9 a.m. Monday.