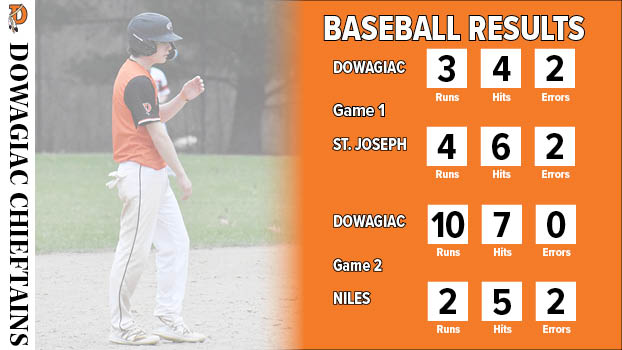 ST. JOSEPH — Dowagiac went 1-1 and Niles was 0-2 at the St. Joseph Tournament Saturday.

The Chieftains lost to the host Bears 4-3 in nine innings before beating Niles 10-2 in a game that lasted five innings due to a the time limit.

The score was deadlocked at 1-1 after seven innings and 3-3 heading into the ninth inning after both teams scored two runs in the eight using the International Tiebreaker.

The Bears pushed a run across the plate in the bottom of the ninth to earn the win.

Mason Peck took the loss for the Chieftains in relief of Ben Klann, who pitched eight innings.

Klann also had a double for Dowagiac, which had just four hits in the game.

Peck earned the victory as he worked all five innings, allowing two runs on five hits.

Dane Asmus had a double for the Vikings. Austin Bradley suffered the loss.

Dowagiac and Niles are now 2-2 against each other this season.

Bradley was 2-for-3 for the Vikings with an RBI.

Braylon Schultz took the loss on the mound for Niles, which is now 4-13-1 on the season.