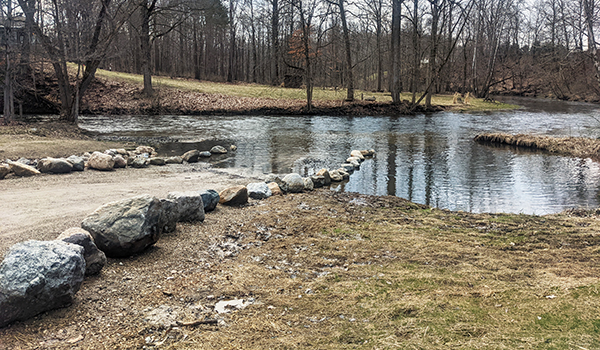 The Michigan DNR will maintain the access road and boat launch area at the site of the former Pucker Street Dam site on the Dowagiac River. (Maxwell Harden | Leader Publications)

According to NTFD Lieutenant Marc Brandon, dispatch sent emergency crews to an address on Creek Road near the river based on coordinates from cell phone data. The kayakers were found hanging onto a log approximately 150 yards north of Kinzie Road.

“We couldn’t see them from the road because the creek meanders and turns,” he said. “I sent a couple guys on foot through the woods and they found them.”

Personnel were able to pull everyone to safety and no injuries were reported.

“They grabbed onto a log and were just sitting there floating,” Brandon said. “One of the kids had been dragged under the water but they got him back out. Everybody was fine.”

Having responded to and coordinated several Dowagiac River rescues during his career, Brandon said the river’s structure makes accidents like Sunday’s occur.

“It’s almost always the same thing, there’s just a lot of debris in it,” he said. “The kayakers are usually not the most experienced and don’t know how to handle those situations and it gets out of control.”