DOWAGIAC — What happens when five reluctant bridesmaids find themselves together in the same bedroom in an attempt to escape a wedding reception?

In the latest production at a local theatre, they talk about sex, drugs, current events, personal turmoil, and more sex.

For its second play of its 2022 season, The Beckwith Theatre Company, 100 New York Ave, Dowagiac, is presenting an adult-themed comedy, “Five Women Wearing the Same Dress,” for two weekends of performances from Friday, May 6 to Sunday, May 15.

Written in 1993 by Alan Ball, Five Women is the story of five bridesmaids at a wedding reception who are all unenthusiastic about their relationship with the new bride, as well as the reception. Each for their own reason, the women end up retreating to a bedroom at the venue throughout the evening.

As their stories come together, the women discuss anything and everything in their personal lives, and eventually find out they have more in common with each other than the bride they came to support.

“It’s a comedy with a little bit of meat to it,” said director Larry Nielsen, adding the bridesmaid dresses take on a character in and of themselves. “The comedy is great and then the stories are also endearing. That’s really the type of play I like – a comedy that’s a little slice of life.”

Originally set in Tennessee, the play has been adapted to be set at a fictional wedding venue just outside Dowagiac. It also has been updated to include current events the audience can identify with, according to Nielsen.

“Rehearsals have been a blast,” Nielsen said. “We have a lot of references to Dowagiac in the play, like the candy shop and Twistees, that people will catch … it is a laugh-out loud comedy though, just with a little bit of meat.”

“It’s been really fun,” said Corey-Davis, who didn’t know any of the other cast members prior to the production. “Theater really brings people together in a way that’s really unique and really fun.”

Each of the female cast members said it was nice to be working in a cast of mostly women, as well as working with a small cast. According to Stepka, the cast have all had relatable moments with their characters that help them connect to the role and to each other.

“Every single character has this moment where the performance lifts and they become very genuine and allow the rest of the girls, the rest of the bridesmaids to see themselves,” Stepka said. “Seriously, I promise every single person that comes to see the show will see something and they really do that hurts – and cracks you up too. It’s really awesome.” 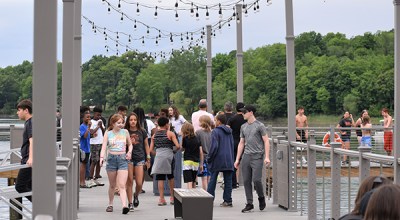 Bucks improve to 16-1 with sweep of Kalamazoo Central