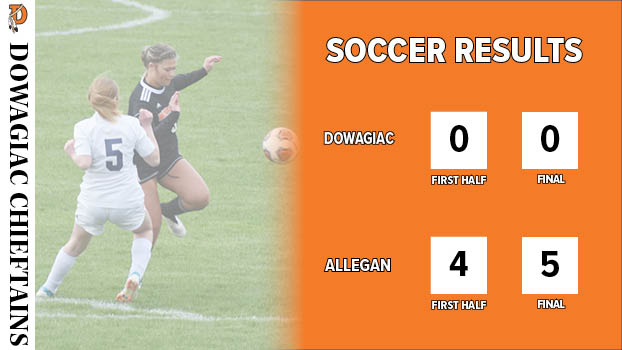 NILES — Monday was not a good night for area soccer teams.

Dowagiac was blanked by host Allegan 5-0 in Wolverine Conference play, while Edwardsburg had to settle for a 1-1 tie with Paw Paw.

Dowagiac managed just five shots on goal as it was shutout by the Tigers.

Triana Lee had 12 saves for the Chieftains, who drop to 5-3-2 overall and 2-2 in Wolverine Conference matches.

Allegan scored three of its goals on a penalty kick and two free kicks.

“It was a tough night for us we gave up some easy goals, but I’ll say the girls played extremely hard and showed improvement throughout the match,” said Dowagiac Coach Chad Davis.

Amaya Shier had the lone goal for the Eddies against the Red Wolves. Samantha Stewart had the assist

Aleena Keh and Lucianna Ryan had two goals each to lead the Rams to the victory.

The loss dropped the Bobcats to 2-6 overall.