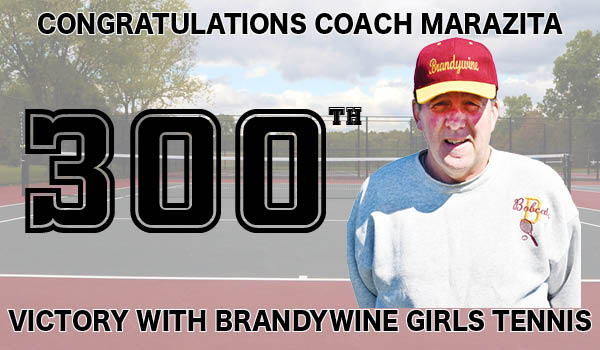 The Bobcats blanked Schoolcraft 8-0 to remain undefeated on the season. Despite the shutout, the match was competitive, with two flights being decided in three sets.

Marazita said that the wins have never been the objective.

“While achieving 300 wins is a nice milestone, it was never a goal of mine, but rather a result of the great student-athletes we have had the privilege to coach, which includes 13 valedictorians and 14 All-State Players,” he said. “My main objective as a career coach at Brandywine is to motivate the players to always give 100 percent and trust the process we have established. And I know that is easy to say, but not easy to achieve unless the players and coach’s all buy-in, which we have.

“It is also fair to say that this wouldn’t have happened without the support of my wife Kathy who has been with me from day one, and Coach [Richard] Robbins, who has been with our program now for over 10 years and our newest Assistant Coach Caitlin Stanner, who was one of the best doubles player we ever coached. Add in the great support from current and past parents, grandparents, and all the pieces seemed to have fallen in place to get to this point. Also, the new tennis courts and amenities at our school has been rejuvenating.”

With the end of the regular season just weeks away, Marazita said the Bobcats are refining their focus.

“I think our team is as ready for the conference tournament and regionals as we can be,” he said. “I have some concerns due to all the matches we have to play back-to-back due to the terrible weather that we can’t fine-tune some issues due to a lack of outdoor practices. But we certainly aren’t alone as all the teams are in the same boat. Fortunately, we control our own destiny.”

Brandywine returns to the court Wednesday as it hosts New Buffalo in a BCS Athletic Conference non-divisional match. The Bobcats are also home Thursday against Bridgman/Lake Michigan Catholic.