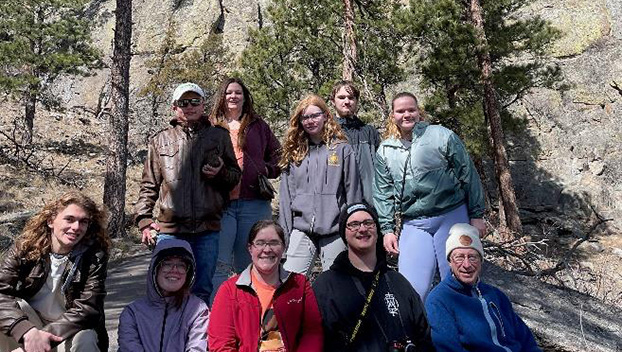 Snow fell on April Fool’s Day as the group left at 6:30 a.m. with a send-off by President Dr. Joe Odenwald. Four hours later they crossed the Mississippi River.

At Herbert Hoover’s Iowa boyhood home, they viewed the two-room house in which “Bertie” was born in 1874, his father’s blacksmith shop and the Quaker meetinghouse dear to his mother. Orphaned at 9, Hoover lived with Oregon relatives, but always cherished West Branch and continued visiting until his 1964 death.

Within walking distance, the 1962 Herbert Hoover Presidential Library and Museum relates his boyhood, education at Stanford University, an overseas career in mining and engineering, his 45-year marriage, World War I efforts on behalf of Belgian orphans and food conservation, 1920s service as Commerce Secretary, his election as the 31stPresident and post-presidential career. Hoover was an American hero before becoming a scapegoat for the Great Depression, which crippled his 1929-33 administration.

“I have been wanting to visit Hoover’s historic site for four years,” Franks said. “Getting an opportunity to visit with the college was astonishing. Knowledge I gained about Crazy Horse and the Des Moines Capitol was eye-opening. My favorite memory has to be history nerds Joe Coti and me throughout the Capitol and Hoover’s historic site. That’s a memory I’ll never forget!”

Saturday started with “Dignity: Of Earth and Sky,” a sculpture near Chamberlain. A stainless steel construction 50 feet high depicts a Sioux woman clothed in traditional dress, draped in a brilliant star quilt.

“It’s hard to choose which site was my favorite. I loved Dignity,” Burggraf said. “Her strength and beauty are truly remarkable. Crazy Horse’s museum and monument is a nation-building landmark that shows resilient Native communities continue to thrive even after so much loss. The Badlands has beauty all its own and is a vast reminder of how important Native communities are to our nation and culture.”

The Crazy Horse Memorial in the Black Hills is larger than Mount Rushmore and has been under construction since the 1940s. The face is now complete of the Lakota warrior who in 1876 led the Indian coalition that destroyed George Armstrong Custer’s force at the Battle of Little Bighorn.

“Learning about Native American culture while visiting the Crazy Horse Memorial was absolutely fascinating. Learning about the different aspects in Hoover’s life and presidency was interesting as well,” Conroy said.

Sunday they ventured into Wyoming. Devils Tower is a 1,267-foot butte with a 1.5-mile base. Native lore holds its crevassed surfaces were created by a great bear pursuing seven maidens who took refuge on top before escaping into the heavens to form the Pleiades constellation.

“It’s one thing to view images of a place you are studying, but another thing entirely to physically see them,” Pitsch said. “I can now better understand why places such as Devils Tower and the Badlands are viewed as sacred. I firsthand felt the powerful tranquility of being in their presence.”

“My favorite part of the trip was the Badlands,” Lull agreed. “It’s unlike anything I’ve ever seen. I enjoyed seeing wildlife up close. I feel I learned a lot about the culture of Native peoples.”

“This trip was like no other,” Westrate said. “I had never been to any of the states we visited. My favorite part was the drive through the Badlands. I love beautiful scenery. This was something I’ll never forget.”

On their final day in Mitchell, S.D., they took in the 1892 Corn Palace, a paean to Plains farmers. Each year, its façade is refashioned from various hybrids and colors of corn to “a-maize-ing” effect.

“The Corn Palace was a bit corny, but a fun stop,” Burggraf said.

Cross-country runner Gavin Smith “loved this trip,” which “made me want to continue to pursue my dream of running and walking across the country. This great adventure felt like a dream. I can honestly say this trip changed my life, showing the world as much bigger and more fascinating than I knew.”

“The history trip with Professor Dennis was an excellently-organized adventure with great people,” Herr said. “I thoroughly enjoyed all the destinations we visited and loved that we were able to make adjustments to accommodate things that piqued our interest. This trip sparked an interest in me to continue to learn more about historical events and to visit more memorable sites. I compare our trip to the Magic School Bus. We were being educated, but in such a fun, entertaining way we will never forget things we learned. I would highly recommend anyone who has the opportunity to take this trip or one similar to do it without hesitation. It’s 110-percent worth it.”

SMC funds a variety of travel opportunities to broaden students’ experiences. Some examples include SkillsUSA for criminal justice;  the American Chemical Society, from San Francisco to Orlando; the American Sociological Association in Los Angeles this summer; and Chicago, from the Auto Show and Lyric Opera to psychology conferences.