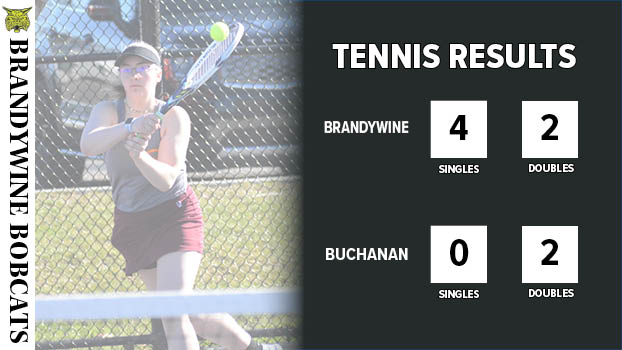 On Friday, the Bobcats defeated rival Buchanan 6-2 in a BCS Athletic Conference match, while on Saturday, Brandywine defeated Kalamazoo Christian and Galesburg-Augusta to win the Bobcat Open.

Against the Bucks, Brandywine swept the singles flights and split the doubles flights to improve to 2-0 on conference matches.

The Bucks’ Norah Kutemeier and Taegan Summers defated Tressa Hullinger and Hope Tyler 6-3 and 6-1, while Isabella Bryans and Mehkenna Olinghouse defeated the Bobcats’ Isabelle Sosnoski and Monse Avina 6-0 and 6-2.

At the Bobcat Open, Brandywine defeated Kalamazoo Christian 7-1 and Galesburg-Augusta 8-0 to improve to 11-0 on the season.

Brandywine swept the doubles flights against both opponents, winning seven of the eight in straight sets.

Chloe Sidenbender and Dani Holden had the most competitive match of the day as they defeated Kalamazoo Christian’s Lauren Fox and Samanth Huffsterier 6-2, 4-6 and 11-9.

Parma Western finished with 12 points, while the Eddies had 10 points and St. Claire one point.

In singles matches, Leah Hosang, Claire Deak and Julia Jones were all 2-0 on the day.

In doubles action, Lea Stern and Delaney Haradine, Katie Schaible and Ella Castelucci, along with Ryliegh Reynolds and Mackenzie Vargo, were all 1-1.