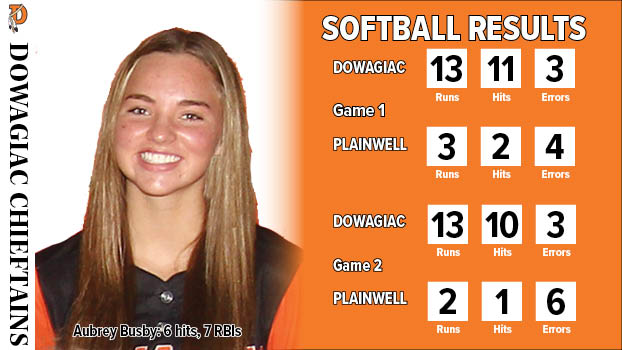 PLAINWELL — A trio of area softball teams left their opponents little doubt who were the better teams Friday.

Dowagiac and Edwardsburg swept their Wolverine Conference opponents, while Brandywine out of conference play to rout Union City.

The Chieftains scored 26 runs on 23 hits in sweeping Plainwell 13-3 and 13-2 Friday afternoon.

Sierra Carpenter tossed a two-hitter with eight strikeouts in the opener.

In the nightcap, Sarah Allen tossed a one-hitter with four strikeouts.

Busby had three hits and five RBIs and Taylor Wimberley had two hits and two RBIs for Dowagiac.

The Chieftains improve to 7-2 with the sweep and 3-2 in Wolverine Conference action.

The visiting Eddies remain undefeated in Wolverine Conference action with a 4-1 and 10-4 sweep of the Bulldogs.

Emma Denison tossed a three-hitter with 13 strikeouts for the Eddies in the opening game. Caitlin Tighe was 2-for-3.

Edwardsburg is now 11-6 overall and 4-0 in league contests.

In the opener, Kadence Brumitt had a pair of doubles and two RBIs, while striking out five in the circle. Chloe Parker had two hits and four RBIs.

Brumitt was also the winning pitcher in the nightcap. At the plate, she had three hits. Parker had three hits and scored three runs and Paige Krisher had two hits.

Brandywine improved to 6-4 with the sweep.