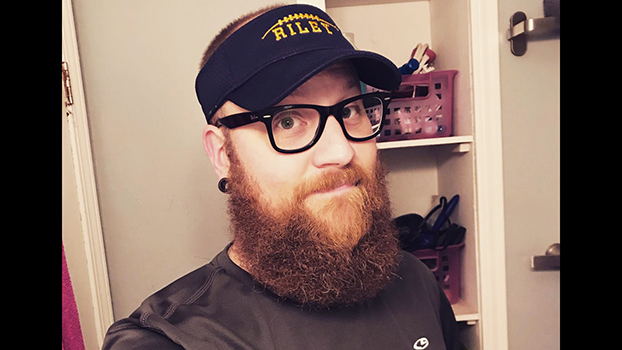 Justin Kinzie has been hired to replace Mike Nate as the Brandywine football coach. (Submitted photo)

NILES — The last time Brandywine had to hire a football coach, they selected one who had spent some time at South Bend Riley. That coach was Mike Nate, and it turned out pretty well for the Bobcats.

Nate, who was hired in 2009, went 73-49 at Brandywine, making the postseason seven times. Before he took over the Brandywine program, he won five games at Riley.

Monday night, the Brandywine Board of Education approved the hiring of Justin Kinzie as its new football coach, replacing Nate, who retired following the 2021 season.

Kinzie, who has been an assistant coach at South Bend Washington, South Bend Adams and Mishawaka Marian, spent the last two seasons as the interim head coach at Riley. His teams went 4-10. Riley, which has only had two winning seasons in 20 years, had 39 players on its roster when Kinzie took over. Those numbers increased to 64 last season.

“I think honestly, what we did with COVID, which was so hard, especially with the juniors and the seniors, a lot of those guys went out and did other things,” Kinzie said about increasing the numbers. “They got jobs. They did other things. So, what I did was focus on the young guys, the freshmen and sophomores. As a coach, everybody says family. They break the huddle and say ‘family on three,’ everything is #family. Everybody says it, but it is just an expression or a catchphrase, and it doesn’t mean anything.

“When they played other sports, I traveled. I went to JV wrestling meets and stuff like that. When I was at home, I would be on Google Meets and I would help them with their homework. We did community stuff. Just showing them, and it is just not at Riley, but I think in many communities, if you are an adult and a role model, if you show these guys that you actually care and it is about more than just football, it shows that I can connect with the guys.”

Kinzie had some familiarity with the Brandywine program as he knew a couple of assistants on Nate’s staff. He also knew, following his second season at Riley, he wanted to coach at a smaller school and get out of the city.

During a three-week stretch that the program had to shut down due to COVID, Kinzie hit the road to visit some small towns to take in the football atmosphere on Friday night. He fell in love with what he saw.

“I coached at Marian, which is a smaller school, but it is a private/parochial school, so it is kind of a different experience,” he said. “So, we had three weeks that we were quarantined at Riley. I love the kids there, but I got it stuck in my head that I wanted to check out some smaller schools and see what it is like to have hundreds of fans, little kids running around, and tailgating. The experience was unbelievable. I know even before Riley informed me they were heading in another direction, I decided I needed to go find a small community and get out of the big city.”

Brandywine Athletic Director David Sidenbender is happy to have finally completed a process that began following Nate’s retirement in November. He believes Kinzie is the right coach to help the Bobcats take the next step.

“When Mike retired, I surveyed the players and talked to many of the staff members and that gave us a direction as to where our program needed to move toward,” he said. “Brandywine is forever grateful for what Mike built, and we wanted to make sure we kept that going. There were 11 applicants, who were narrowed down to three, and after two sets of interviews, Justin was our clear choice. Justin brings experience as a head coach, new energy, and dedication to football 24/7. He also is a detailed oriented person with a keen sense of the analytical side of football. His high energy and enthusiasm toward teaching and kids will really benefit our players and football community.”

One of the things Brandywine wanted to do differently with this hire was to have whoever became the football coach also be a teacher. The potential of several positions opening up at the end of the school year allowed the district to address that.

“Another factor was, he has been a teacher for 15-plus years, so he possibly has the opportunity to be in the building all day to forge relationships with the players and recruit the kids from the halls to the field,” Sidenbender said. “We were very fortunate to have had so many quality applicants, and we are confident Justin will have success here and our student-athletes will benefit greatly from him being our new head football coach.”

Kinzie is currently teaching math at Niles Community Schools. He, and his wife, Allison, have two sons, Mason, 15, and Broderick, 13.