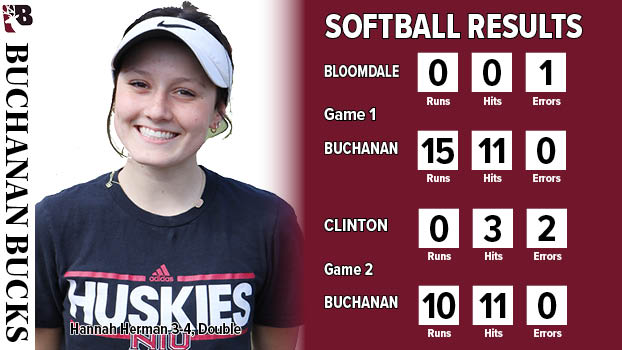 BUCHANAN — The showdown between preseason No. 2-ranked Buchanan and No. 3-ranked Clinton at the Buck Classic was one-sided Saturday.

The host Bucks blanked Clinton 10-0 in five innings as Camille Lozmack tossed a three-hitter and Buchanan collected 11 hits, including three doubles and a home run.

In the opening game, the Bucks (10-1) blanked Bloomingdale 15-0 as Hailee Kara tossed a perfect game with eight strikeouts.

In the game against the Cardinals, Sage Pruett was 2-for-2 with four RBIs. Hannah Tompkins was 3-for-3.

The Eddies went 1-2 at the Gull Lake Invitational Saturday.

Against Lake Orion, Emma Denison tossed a two-hitter for Edwardsburg with 12 strikeouts. She also had two hits to lead the Eddies offensively.

Edwardsburg fans may remember Harmony Laker of Wayland from the basketball regional where she scored 35 points. The freshman scattered six hits in earning the win.

Anna Jankoviak and Abby Bossler both doubled for the Eddies.

Against Byron Center, Caitlin Tighe had a double.