Residents voice concern over noise at power plant, which is weeks from opening 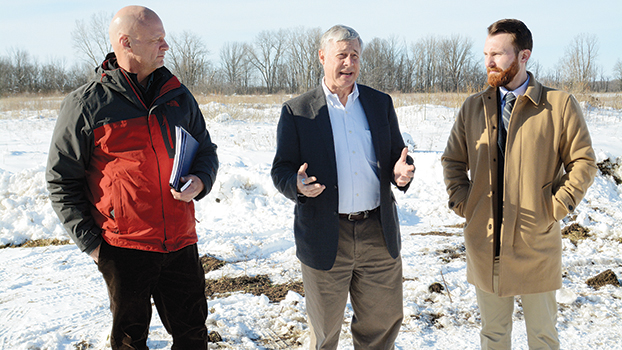 NILES – The start of service for a new power plant may soon be music to residents’ ears, if all goes as promised.

Since construction on the $1.1 billion Indeck Energy Services natural gas power plant ended and system testing began last fall, residents in homes nearby have expressed frustration about loud noise coming from the plant.

Gabe Casey lives a half-mile from the new plant, which is located in Niles Industrial Park on the north edge of the city, and is surrounded by Howard Township. He said he and neighbors have been hearing the noise, which he likened to an airplane sound, since last fall, and that it has gotten worse in the last week.

“The company said the noise was temporary and short-term in November. They said the noise came from cleaning out the system so it would be safe to operate,” he said. “Month after month, it’s gotten worse recently, and it sounds like hearing the Boeing 747 sound 24 hours a day for a week. We can hear it with the windows shut.”

Casey noted that while he and other nearby residents in Howard Township know it is too late to stop the plant — which they have opposed since it was first proposed more than 20 years ago — they would have liked to see their noise complaints addressed.

“If you’re outside doing yardwork, it’s like hearing an airplane roaring all the time. The plant is located in the city and there’s a city ordinance against noise, but the city won’t talk to us because we’re in the township,” he said. “It’s like a weird donut hole (the location of the plant) and we have no one to complain to. We’ve tried talking to Indeck, but they won’t talk to us and won’t put anything in writing to the township. It’s very frustrating.”

Larry Eckler lives about a mile away, and also hears the noise.

“It sounds like a jet airplane ready for takeoff, and it never takes off to stop the noise,” he said. “I attended every EGLE (DEQ) hearing about that concern and was told it would sound like a refrigerator running or a lawn mower in the distance. Some days are worse, depending on the weather.”

The Howard Township office has fielded noise complaints from people as far away as South Bend over the months. Each time, Kasprzak tells residents to contact the city. He said Indeck officials have told him the noise is coming from clearing out construction materials from the system.

Niles Mayor Nick Shelton commented on the noise complaints Jan. 12 on his Facebook page, and told people the noise would only last another two weeks. He said company officials told him that the noise came from the release of steam created by purging contaminants and construction debris from the systems.

City Administrator Ric Huff acknowledged that there have been complaints about the noise, but reiterated that the noise is temporary and is caused by what the contractors call a “blow down” using steam and pressure to clear construction debris from the pipes and fixtures. He said he was onsite in early April and did not hear anything.

Indeck Vice-President for Business Development David Hicks said that the plant will be operating commercially by the start of May, which should mean an end to any noise complaints. He described the noise produced at the site over the last few months to be temporary and minor and not constant.

“We’ve complied with city noise ordinances,” he said. “The piping when delivered to the site sat outside in the weather and dirt, mud and other debris can get inside. We have to do our best to clean that out, and the steam blow is typical in getting a plant up and operating. We know that the noise can be a bit unnerving, but we ask for people’s patience the next couple of weeks as we finish.”

Hicks said that with operations starting in May, the plant will be operating a month ahead of the June deadline Indeck has to start delivering power to contracted entities.