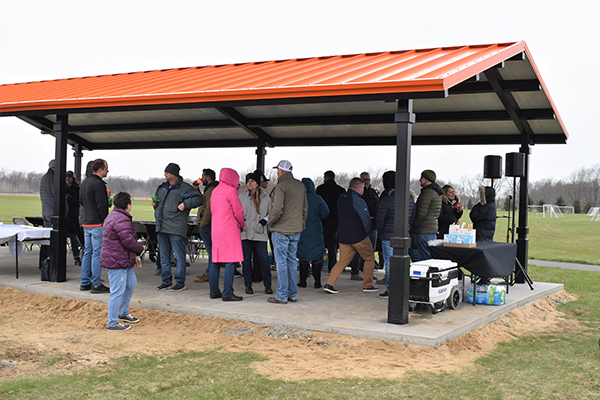 DOWAGIAC — After years of planning, fundraising and construction, a local nonprofit has successfully completed a project they hope will make a difference.

The Young Professionals of Greater Dowagiac, along with the Dowagiac Chamber of Commerce, hosted a dedication and ribbon-tying ceremony at the newly-completed Russom Park Pavilion on Wednesday during the April’s Chamber After Hours event.

Built in 2013, Russom Park sits along the boundary line between the City of Dowagiac and Silver Creek Township, and was originally a project between the two municipalities. The park features multiple baseball, soccer and softball fields.

Dozens of local business owners and Dowagiac Mayor Don Lyons showed up for the event. While there is still some work to do – including installing a plaque on the boulder next to the pavilion and adding picnic tables, members of the Young Professionals were pleased with the results.

“I think it’s great so many people showed up – not that I expected anything else from Dowagiac really,” said Young Professionals President Stefanie Holland, adding the last of the concrete was just poured this week. “It’s been received very well, by both the city and the township. It’s nice to see a finished product and to be able to hand it off to Russom Park and the Silver Creek Township team.”

Beginning in the spring of 2020, the group held multiple fundraising events and received many community donations to raise $40,000 dollars for the construction of the pavilion. After reaching their goal, the group broke ground in May 2021.

“That’s a lot of money,” Holland said. “We wondered how we were ever going to raise that. It almost seemed like we were never going to get it done, but the community really stepped up.”

The next project the Young Professionals is going to take on is raising funds for the city’s Fourth of July fireworks on Friday, July 1.

“As is the world today, all the prices of everything are going up,” Holland said. “We’re going to have to hit the ground running pretty hard.