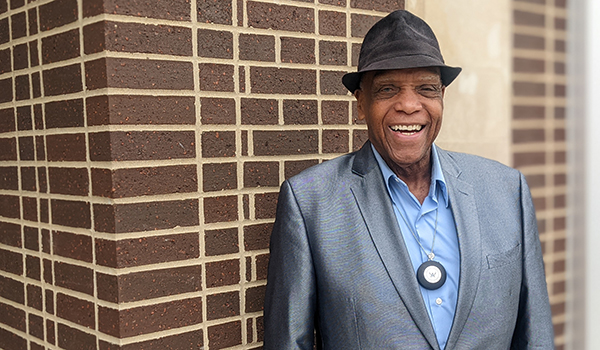 Billy Shelton, 88, is the last of the original The Spaniels Forever singers. (Maxwell Harden | Leader Publications)

Correction: In a prior publication of this piece, the date of the concert was stated incorrectly. The Spaniels Forever will be performing Saturday, May 14. The Niles Daily Star regrets the error and is happy to correct it.

NILES — An iconic, globe-trotting band will be taking center stage in Niles next month.

The Spaniels Forever will be headlining the annual Spring Fling Doo-Wop Thing concert at 7 p.m. Saturday, May 14 at Niles High School. The family-friendly performance is being put on by Niles-based Agape Entertainment Group.

This year’s show will include special guest Sheryl Youngblood. Tickets are $18 for general admission and can be purchased at the door or in advance by calling (269) 362-0026.

The Spaniels Forever are an R&B and doo-wop group consisting of band members Patrick Pitre, Fred Dubose, Phil Ratliff, Daniel Porter and Billy Shelton, 88, who is the only original member of the band.

“The presentation, the showmanship, that’s what keeps a singer going,” Shelton said. “I think I have been doing this longer than anybody outside of maybe Tony Bennett. 85 years of of singing professionally. That’s a long time. I must love to do it, right?”

The concert will include a lineup of classic ‘50s and ‘60s covers. Concert-goers will hear songs by the bands The Temptations, Four Seasons, Beatles and the Bee Gees. The Spaniels Forever will perform their 1953 hit, “Goodnight, Sweetheart, Goodnight.”

“Niles is a really great town,” Shelton said. “Of all the places that we’ve ever gone, there’s something special about Niles. I really like the people; they’re down to earth and they share what they have. Niles has been good to me.”

The Spaniels Forever are considered to be the pioneers of doo-wop. Since forming in 1948, the band has performed internationally and even performed at the White House during the Bill Clinton administration. In 1987, the group received  the Smithsonian Pioneer Award and in 1991 received a Pioneer Award from the Rhythm and Blues Foundation.

They were inducted into the Doo-Wop Hall of Fame in 2005 and their music was also featured in a soundtrack for the movie “American Graffiti.”

While The Spaniels rose in popularity and became known internationally, maintaining a local presence in Michiana has always been important to Shelton and his bandmates. He credits his roots in the church for keeping him grounded as a performer.

“I’ve seen a lot of groups start because we started in the rock and roll stuff in 1948,” he said. “I’ve seen groups like The Temptations and all these groups come up, go to the top and then blow up. I grew up in church and I think that any talent that you have, you should use it for God. I will go and sing at a nursing home or a hospice as quick as I would for a $15,000 gig. I’m just as excited to do that and I figure that God gives you a talent, that’s his gift to you. What you do with your talent, is your gift back to God. That’s why I’m probably the oldest guy still out here. I’ll be 89 years old and I feel good and I mean for a guy my age. I love to make people happy.”