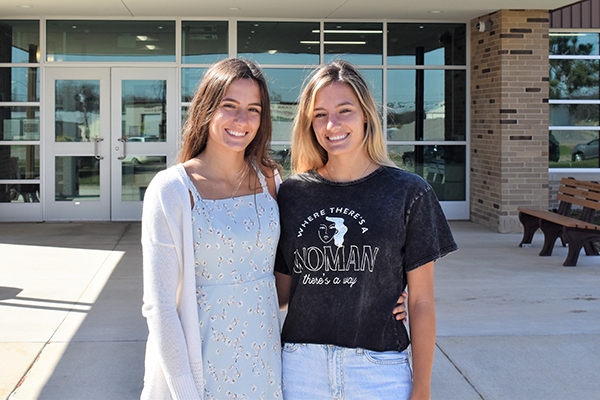 From reflecting on current inspirations to future aspirations, Riley and Taylor sat down for a “twinterview” after being named No. 1 and No. 2 in their class. As they spoke, their similarities – as well as their differences – became apparent.

“At first, I didn’t want to be a part of it because it makes me nervous to have to speak at graduation,” said Taylor, speaking softly while wearing a floral dress and white knit sweater. “But I’m kind of happy because it’s never happened before, so it’s something special that we can remember.”

Riley, on the other hand, said she knew she was going to be valedictorian since middle school.

“I’m like, ‘I’m going to be valedictorian, there’s no question about it’ kind of thing,” she said, wearing ripped jeans and a black t-shirt reading “Where there’s a woman, there’s a way.”

The differences don’t stop at just their style of dress, as the girls also have chosen to attend different universities – though they will be pursuing similar career paths.

Riley will attend Michigan State University to pursue a degree in human biology, with her sights set on being a doctor in the future. She is enrolled in their honors college, and has been offered a Professorial Assistantship.

“What I go into with that research will depend on who I get as my mentor,” Riley said. “Then, I’ll become a published researcher. … Once I graduate, I plan on going to med school — where I don’t really know yet — but I want to specialize in internal medicine and become a D.O.”

When the pressures of school start to build up, both Riley and Taylor have found their own way to de-stress and find some release.

“I like to go hunting a lot. … I’ll put off all my homework until the last minute and go hunting,” Taylor said. “I also like powerlifting … when I’m working out, I have nothing else to think about. I can just do what I want to do.”

Riley, on the other hand, has found a relaxing hobby in showing cows competitively. In 2019, she won Grand Champion in her weight class at the Cass County Born and Raised Festival with her cow “Po,” who she named after the main character from the movie “Kung Fu Panda.”

“Cows have gentle faces … like a big puppy dog,” Riley said. “You just build a relationship with them. [Po and I] were like best friends, and he would play with me while I was cleaning the stall.”

Taylor also plays on the school’s softball team, and has previously participated in volleyball, track and cross country. Riley is on the track team, and previously competed in cross country and powerlifting, after some convincing by Taylor.

“It was fun, but I wasn’t very good at it,” Riley said. “She was a lot stronger than I was, so that was kind of a letdown for me. … This sounds kind of bad, but I always want to be the best at what I do and I struggled seeing her do better than me in a sport.”

Riley added she enjoys listening to music to relieve everyday stress, and has recently gotten into electronic dance music.

“That’s my new thing right now,” she said. “All my friends think it’s the weirdest thing ever, but I love it. My mom’s like ‘are you OK?’”

Since they were in elementary school, Riley and Taylor were taught by their mom, Tina Wimberley, the importance of education.

“Our mom really pushed us to study and do well,” Taylor said. “I think from her just telling us that, she kind of instilled in us to want to do good for ourselves.”

Riley said one of her biggest influences at DUHS has been biology teacher Amy Ott.

“She helped me a lot with the college application process,” Riley said. “She told me about her son that’s going to Michigan, and the things he did to increase his chances of being accepted. She acted motherly toward me in a way, so that was really nice.”

Ott said the two bonded over a mutual interest in the human body, and the two also had conversations about what to expect at the MSU Honors College.

“The biology aspect of it, she really enjoys,” Ott said. “She’s really smart. This comes easy to her, and she can answer questions and she will help the other students in the class who are struggling.”

Taylor said the most influential person in the school she has learned from is her former powerlifting coach Mike Stanger, who is also the former Dowagiac football coach and now coaches the Kalamazoo Central football team.

“Mr. Stanger taught me that in order to be able to do something, you have to believe you can do it,” Taylor said. “If you don’t believe, you’re never going to get to where you want to go. I struggled for the longest time with believing I could actually lift the weight. Then, once I saw that he believed in me, then I started believing in myself. It made me so much more confident in myself.”

Both Riley and Taylor also mentioned their grandparents Ed and Darlene Waldschmidt as being influential in their lives. Taylor said her and her younger sister are always hanging around grandpa.

“He’s never not outside doing something – whether it’s cold, snowing or not, he’s outside,” Taylor said. “He wanted to build a woodshed, so we’ll go out and cut wood with him and he’ll talk to us and make sure we’re not doing stupid stuff and tell us what we shouldn’t be doing. He’s taught us a lot of valuable things, even things my parents haven’t necessarily taught us … he just knows so much about so many things.”

Riley, meanwhile, said she is very close with her grandmother.

“I definitely look up to my grandma,” Riley said. “I’m always with her and always tell her what I’m doing or send her pictures. We’ll sit on the couch and just laugh for hours until she’s like ‘Alright, I have to go to bed.’ … She’s a super passionate person. She’s always looking out for us and keeps us in her best interests. She always writes me these little letters, and when I see them, I’m like ‘Grandma, you’re going to make me cry.’”