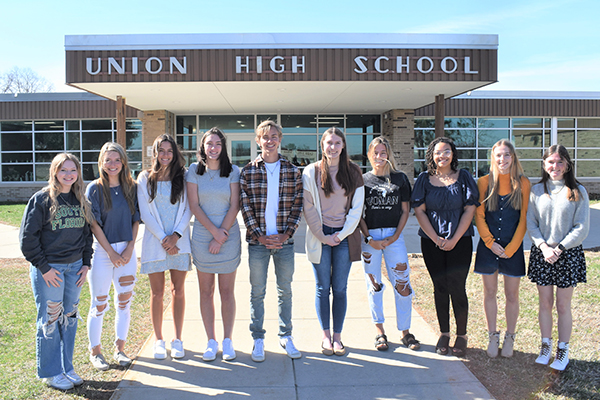 DOWAGIAC — A group of local students was honored Monday for their efforts and excellence in the classroom over the past four years.

The Dowagiac Union School Board recognized Union High School’s Top 10 students of the Class of 2022 during its monthly meeting at Dowagiac Middle School. Interim High School Principal Bryan Sperling introduced the class, and commended each student for their accomplishments while at DUHS.

“I think it’s special because I’ve had this group since they were freshmen,” said Sperling, who was hired as assistant principal in October 2018. “I’ve gotten to see these kids grow up, and they’re an amazing group of kids with an amazing set of parents for each one. They come from wonderful families.”

Superintendent Jonathan Whan also praised the students for overcoming the adversity of the past few years.

“I think it’s really impressive what our Top 10 have done considering they’ve been dealing with COVID for three out of four years they were in high school,” Whan said. “To be that committed and focused is very impressive. Kudos to them.”

Each year, the 10 graduating students with the highest GPAs in the high school are honored. This year’s Top 10 students are listed in order of GPA: