Caruso’s to undergo renovations ahead of 100th anniversary party 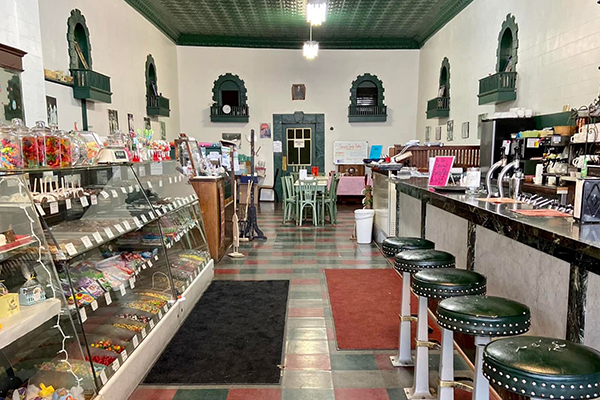 DOWAGIAC – One of the oldest local establishments is getting a facelift in advance of its centennial celebration.

Caruso’s Candy & Soda Shop closed its doors for a few days this week to begin a series of renovation projects as owner Julie Johnson prepares the store for its 100th anniversary party on June 18.

Johnson said the work will include new floors, new paint, an update to the façade and some minor structural changes. But don’t worry, Johnson said, the building will still feel like the same Caruso’s local residents have known and loved for decades.

“Some people are concerned about it ruining the integrity of the nostalgic Caruso’s that they’ve all been so used to, but nothing we’re doing will change that,” she said. “Just some things that are past due, and need to be replaced and updated.”

Johnson’s grandparents, Antonio and Emilia Caruso, opened the store in 1922, and Johnson said some of the renovations will be made to honor the family’s heritage by giving the shop a more Mediterranean look – with gold, rust and blue colors.

“It will be a much warmer feeling when you’re walking into the store,” said Johnson, adding Shannon Lyons of The Altus Apartment will be assisting with the redesign. “Everybody’s seen what her work is. She’s graciously agreed to help me figure this out because it’s a huge undertaking, and lots of decisions to be made.”

According to Johnson, the Caruso’s façade will be updated to match the interior, but stressed that the family and store history would be maintained in the finished product.

“We’re keeping in mind the Italian side of our family, but also the nostalgic side,” she said. “You can see by looking at the pictures on the wall we have in here that there have been changes over the years. It’s just the changes have been so many years in between that a lot of people don’t remember. … It’s been long enough to forget.”

Johnson said there are many projects to be completed in the coming weeks, but the hope is to have everything finished by the 100th anniversary celebration on June 18. The celebration, Johnson said, will take place inside Caruso’s, next door at Venue 132 and across the street at Beckwith Park. There will be a live band, a food vendor and an auction to sell some historical pieces of Caruso’s.

“I want it to be like a big street party and celebration,” Johnson said. “I think it’s going to be a really good time. I’m excited.”