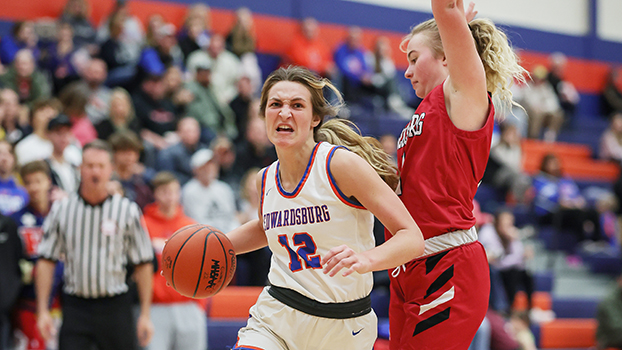 “We are so excited that Macey has chosen SMC to continue her studies in criminal justice and play basketball for the Roadrunners,” she said. “She is an exceptional student-athlete and will immediately impact our program with leadership and a championship mindset.”

Laubach was a key figure in the Edwardsburg run to the Division 2 state quarterfinals, where it was defeated by No. 2-ranked Grand Rapids West Catholic. In the process, the Eddies established a new school record for wins in a single season as they were 24-1 overall.

Playing multiple positions on the court, Laubach averaged 15.9 points, five rebounds and five steals per game. Those numbers helped her earn second-team Division 2 All-State from the Associated Press. Laubach was an honorable mention selection by the Basketball Coaches Association of Michigan as a junior. The 2021-22 BCAM’s Best (all-state) team has not yet been announced.

Laubach is a three-time All-Wolverine Conference performer. She earned first-team honors this past season, while she was second-team as a junior and a sophomore.

“Macey knows how to play fast and compete at a high level,” Wasielewski said. “She finishes strong off the bounce and stretches defenses with her ability to consistently knock down the 3-pointer. Macey is ready to elevate her skills and overall game at the college level and our fans will love seeing her compete on the court.”

“I am excited for Macey and her family as she takes the next step in her basketball journey,” he said. “SMC is getting a very talented player who is only going to continue to grow and develop. She will be a difference maker for the SMC program and provide an instant impact.”

“I am so excited for Macey to have the opportunity to continue her basketball career at the next level,” he said. “It has been a joy watching her grow and develop as a basketball player the last four years. In Macey, SMC is getting a great all-around athlete that has been a key to our success at Edwardsburg. Macey is a great defender who can create a lot of pressure, but also has the skill set and athleticism to score at all three levels.”

The other members of the inaugural Roadrunner squad are Charlee Balcom, of Constantine; Kamryn Patterson, of Niles; Ariana Lemons, of Michigan City; Alysa Adamczyk, of Brandywine;