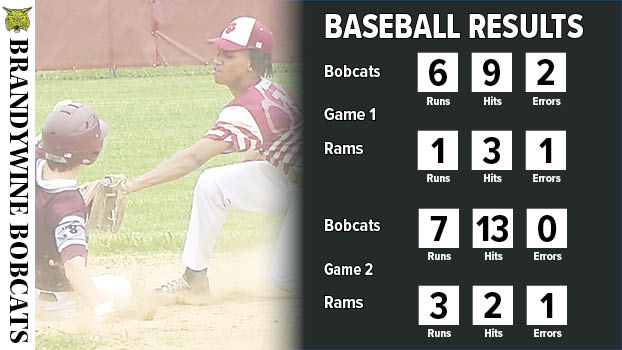 SOUTH HAVEN — Visiting Brandywine improved to 4-0 on the season as it swept South Haven in its BCS Athletic Conference Red Division opener Tuesday.

The Bobcats won the opener 6-1 and then completed the sweep 7-3.

Brandywine led 2-1 heading into the top of the seventh when it scored four times to seal the victory.

With one out, James Barnes, Carson Knapp, Connor Dye, Jacob Sherrick and Jeremiah Palmer hit consecutive singles. Dye drove in two runs, while Palmer drove in the final run of the contest.

The Bobcats finished with nine hits, including three by Palmer.

Owen Hulett picked up the win as he worked into the seventh inning, allowing three hits and striking out 10. Barnes came on to get the final out of the game, a strikeout.

In the nightcap, South Haven jumped out to a 3-0 lead after one inning of play, but Brandywine responded with two runs in the second, single runs in the fourth and fifth before finishing with three runs in the seventh.

The Bobcats had 13 hits in the contest, led by Hulett’s 4-for-4 performance. Tyler Deming, Barnes and Drew Deming all had two hits. Barnes, who had a doubled, picked up the win as he tossed a two-hitter with 11 strikeouts.

The Bobcats host Decatur in a non-conference doubleheader Thursday.

Trailing 4-3 heading into the fourth inning, Edwardsburg scored three runs to take a 6-4 lead over host Mattawan and then fought off the Wildcats for a 10-8 non-conference victory Tuesday night.

The second game of the doubleheader was stopped after three innings due to darkness with the Eddies leading 3-1.

After falling behind, Mattawan scored a run in the bottom of the fourth to cut the Eddies’ lead to 6-5. Edwardsburg then scored four times to take a five-run lead.

The Eddies had to hang on as the Wildcats scored twice in the sixth and once in the seventh to close within two runs. Mattawan was unable to overtake Edwardsburg in its final at-bat.

In the pivotal fifth inning, back-to-back errors by the Wildcats helped get the Eddies rolling.

A sacrifice fly by Sam Robinson plated Logan McColley with the 10th run for Edwardsburg.

Robinson and Landon Mikel both drove in a pair of runs for Edwardsburg, which hosts Niles in its Wolverine Conference opener Friday.

Robinson was the winning pitcher as he worked the first three innings, allowing two earned runs on three hits with three strikeouts. Caleb Layman, Connor Ostrander and Eli Wideman also took the hill for the Eddies.