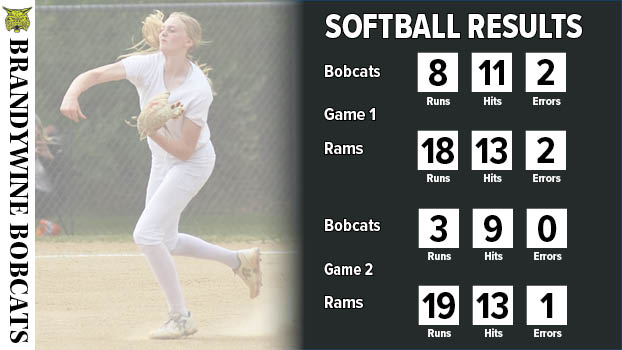 SOUTH HAVEN — Visiting Brandywine gave up 37 runs on 26 hits as South Haven swept the Bobcats 18-8 and 19-3 in the BCS Athletic Conference opener for both teams Tuesday.

The Rams scored five runs in the third, fourth and fifth innings in the opener to erase a 5-3 deficit.

The Rams scored five runs in the first and second innings in the nightcap before exploding for nine runs in the third.

South Haven had 13 more hits in the nightcap, including a home run from Hoyt and doubles from McGee, Kamryn Holland, Olivia Wiley and Ciara Perez. Hoyt was again the winning pitcher.

Parker was 2-for-2 with a pair of doubles and two RBIs to lead the Bobcats. Julia Babcock went 2-for-3 with an RBI.

The Bobcats are back in action Thursday as they host Decatur in a non-conference doubleheader.