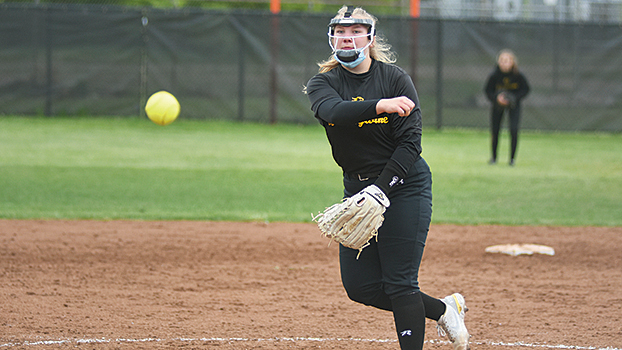 Haley Scott was the winning pitcher and went 3-for-4 at the plate with five RBIs as Brandywine defeated Coloma 12-7 Friday afternoon. (Leader file photo)

NILES — Host Brandywine scored 12 runs on 18 hits and did not commit an error in defeating Coloma 12-7 in non-conference softball Friday afternoon.

The Bobcats scored two or more runs in four of the six innings in the debut of Brandywine Coach Mike Brumitt.

The second game of the doubleheader was canceled due to the weather.

Brandywine (1-0) added three more runs in the fifth to extend its lead to 12-4. The Comets tried to rally in the final two innings, but could not overcome the early deficit.

Haley Scott was a force in the circle and at the plate for the Bobcats as she scattered eight hits to earn the win while going 3-for-4 with a double and five RBIs at the plate.

Chloe Parker was 4-for-5 with a pair of doubles. Kadence Brumitt also had a double.

“The girls were really excited to get out and play,” Mike Brumitt said. “We had a really good offensive game, and we needed it. Going forward there’s a lot of little things to clean up, and with a win under our belt, I feel the girls will be ready and willing to work on them. As always pitching, fielding and confidence is where we’ll start.”

The Bobcats hit the road Tuesday as they travel to South Haven to open up their BCS Red Division schedule against the Rams.