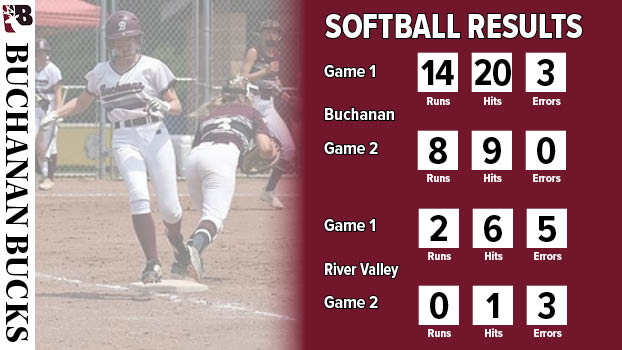 BUCHANAN — The Buchanan baseball and softball teams were finally able to get on the field and kick off the 2022 season Tuesday afternoon.

After having games postponed last week due to weather, the Bucks headed to Three Oaks to face River Valley in non-conference play.

The Buchanan softball team defeated the Mustangs 14-2 in the first game and was leading 8-0 in the nightcap when the game was suspended due to darkness. The Bucks’ baseball team defeated River Valley 16-5 in a single game.

The Bucks banged out 20 hits in scoring 14 runs in the opening game. Buchanan (1-0) also got solid pitching from Hailee Kara.

Kara, Hannah Tompkins, Kamille Lemon and Alyvia Hickok all finished with two hits apiece. Kara and Hickok both doubled, while Herman and Tompkins had a triple.

“Great to get out and play Buchanan softball tonight,” said Buchanan Coach Rachel Carlson. “We hit the ball hard and our pitchers threw well. We had great positive talk in the dugout also. We definitely have things we need to work on. We will get to work on the little things as we continue to face our coming opponents.”

Camille Lozmack, Fisher, Herman and Kara all had two hits in the second game. Lozmack had a triple and Herman a home run.

Lozmack allowed one hit with two strikeouts through four innings.

After giving up a run in the first, Buchanan exploded for seven runs in the third inning to take control against River Valley.

The Bucks (1-0) would score two in the fourth, five in the fifth and two in the sixth to account for their scoring. River Valley scored four runs in the bottom of the fifth to extend the game.

Murphy Wegner went 3-for-3 with a pair of doubles and three RBIs, while Cade Preissing had a three-run home run in the third inning to erase the early deficit.