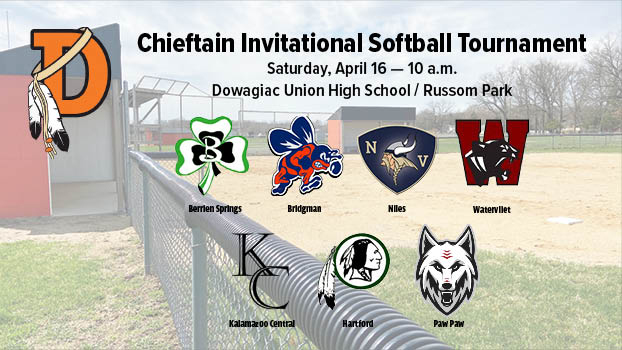 DOWAGIAC — Weather permitting, the Dowagiac softball team will have four games under its belt before hosting the annual Chieftain Invitational April 16.

Currently, the Chieftains are scheduled to host Marcellus April 12 after returning from this week’s spring break. Dowagiac will then take on Otsego in a non-divisional Wolverine Conference doubleheader at Union High School April 14.

The non-league doubleheader against the Wildcats is a make-up game from the season opener, which was originally scheduled for March 28, but was postponed due to snow. Dowagiac was also scheduled to face Bridgman, which will play in the Chieftain Invitational, March 30, but that doubleheader was canceled due to weather.

“Playing a lot of games early allows me to play everyone and in different spots, if needed to evaluate and see who my regulars might be,” he said.

Behnke added that his team will face some strong competition that day.

“Bridgman was a Final Four team last year and Niles is always solid,” he said. “Berrien has a very good pitcher, and you never know who else may come out of nowhere to win the title.”

Games will be played at three sites — the varsity and junior varsity fields at Dowagiac Union High School and the field at Russom Park on Yaw Street. All first-round games begin at 10 a.m.

Dowagiac will face Hartford in the opening round on the varsity field, while Watervliet will face Kalamazoo Central on the JV field. Paw Paw and Berrien Springs will play at Russom Park, while Niles will take on Bridgman at Russom Park.

The Dowagiac-Hartford and Watervliet-Kalamazoo Central winners will play in the semifinals on the varsity field at noon. The Paw Paw-Berrien Springs and Bridgman-Niles games winners will square off at noon at Russom Park.

The losers of the opening round games will play at the Dowagiac JV field at noon.

Games, which the exception of the championship, will be played under a 90-minute time limit with no inning starting after the 90 minutes has expired. The International Tiebreaker will be used for games after the eighth inning or 90 minutes.

The concession stand at Dowagiac Union High School will be open. Food trucks will also be on site.

Here are the opening-round matchups: