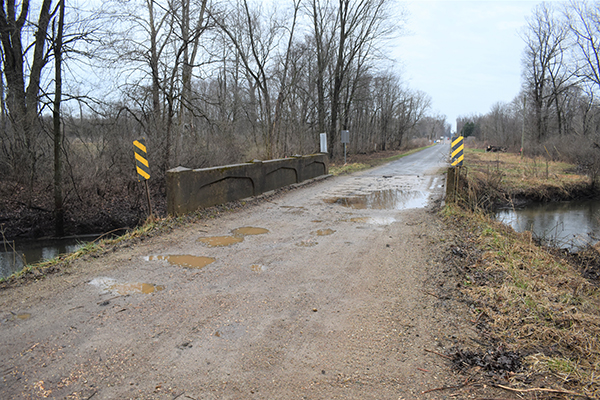 The Cass County Road Commission on Monday announced the start of construction on a $1.5 million project to replace the historic bridge on Rudy Road spanning the Dowagiac River between Swamp Street and Dewey Lake Street in Wayne Township. The project, which began last week will last about four months, and traffic will be detoured along  Dewey Lake Street, Atwood Road and Gage Street.

The bridge, built in 1952 and listed on historicbridges.org for its distinctive design of railing, has been declared functionally obsolete, according to Cass County Road Commission Chief Engineer Joseph Bellina.

“The existing structure is too narrow for traffic,” Bellina said. “It’s just short of being a one-lane bridge.”

The narrow bridge played a role in a Feb. 2021 accident, when a Cassopolis man struck the concrete barrier, going over the bridge rail into the river. He became trapped in his vehicle, and was extricated by the fire department.

According to Bellina, the structure has to be completed by Aug. 1. He said the county was awarded grant funds toward the project about two years ago. State records show the county budget as $78,300 of the $1,566,000 total project cost.