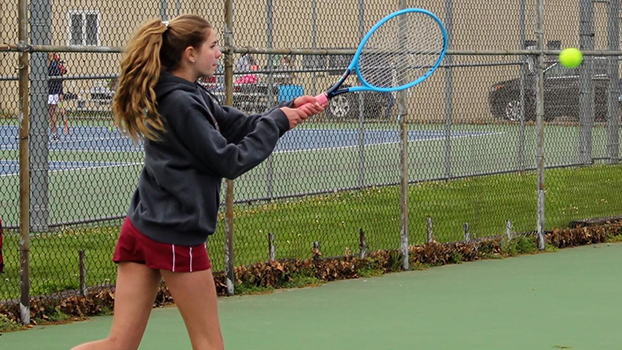 BUCHANAN — Braving the elements, the Buchanan girls tennis team blanked visiting Bronson 8-0 in the season opener for both squads Tuesday.

“The weather conditions weren’t awesome, but the team competed and played pretty well for their first match of the season,” said Buchanan Coach Erik Johansen.

The Bucks won all four on-court matches, while the Vikings forfeited four matches. Buchanan’s wins all came in straight sets.

Oliva Paturalski, Annabelle Adams and Riley Capron won the three singles matches. Mahkenna Olinghouse and Isabelle Bryans teamed up at No. 1 doubles to complete the sweep for the Bucks.

“This was the first time Adams and Capron played singles in a match and they did a tremendous job,” Johansen said. “Paturalksi had the closest match of the day at No. 1 singles and did a great job closing the match out in a better played second set. This is a great group that is very coachable, and I’m excited to see how each and every one of them progress throughout the year.”

Complete results can be found in Daily Data at leaderpub.com.