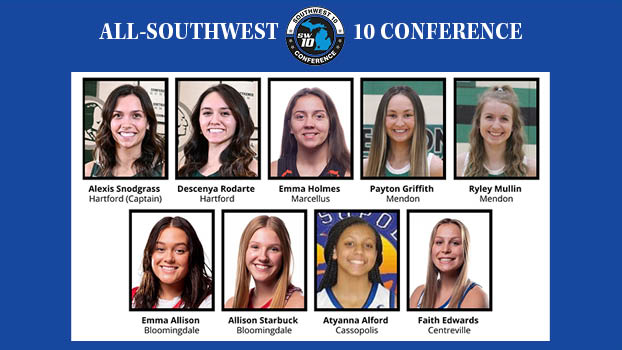 CASSOPOLIS — The reward for turning a season around comes in the form of postseason honors for the Cassopolis girls basketball team.

The Rangers, who were winless in 2020-21, improved to 12-9 this past season, including am 11-7 record in the Southwest 10 Conference, which was good for fourth place.

Atyanna Alford, who was in the top 10 in scoring in southwest Michigan this season with an average of 10.8 points per game, earned first-team All-Southwest 10 honors.

Snodgrass was selected as the team captain.

The Rangers’ Zaniya Dodd earned second-team All-Southwest 10, as did Decatur’s Leah Baushke and Marcellus’ Brooklyn Vantilburg. Honorable mention selections for the Rangers were Ella Smith and Jadin Wolfe. Also named to the honorable mention portion of the squad were Decatur’s Morgan Hall and Lauren Ogrin, along with Marcellus’ Allison Daugherty and Clare Flory.