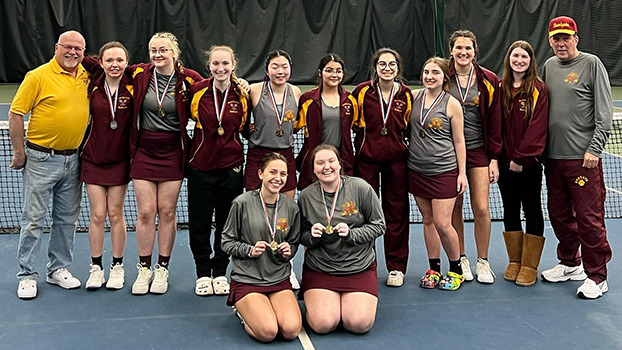 NILES — It may have been the first week of spring, but the Brandywine girls tennis team was forced to move its season-opening tournament indoors due to snow.

The Bobcats, who were forced to forfeit at No. 1 singles and No. 4 doubles because players were still on spring break, edged Three Rivers 18-17 to win the Brandywine Indoor Tournament at Lakeland Athletic Club Saturday.

“Even though we were short-handed due to spring break, I thought we competed hard and had some players really step up to moving up in our lineup,” said Brandywine Coach Joe Marazita. “It was great for our players to finally get to play after a couple of weeks of practice. We have a lot of work to do, but thig group really works hard.”

Winning singles championships for the Bobcats, who are scheduled to return to the court Tuesday when they travel to Kalamazoo to face Loy Norrix, were Hannah Earles (No. 2), Mari Allen (No. 3) and Cortney Bates (No. 4).

Abbie Hubbard and Emma Hinsey were championships for Brandywine at No. 1 doubles, while Abagail Solloway and Hope Typer were champions at No. 3 doubles. Isabelle Sosnoski and Dani Holden finished runner-up at No. 2 doubles.