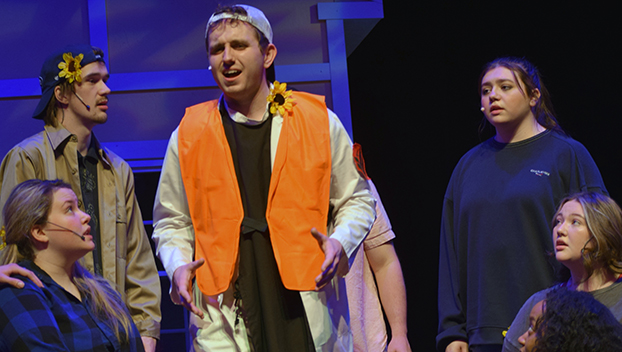 Southwestern Michigan College presents its spring musical, “Godspell,” four times this weekend in the theater of the Dale A. Lyons Building on SMC’s Dowagiac campus.

General admission tickets cost $7 for adults, $5 for students and senior citizens, with SMC students admitted free at the door with their ID.

The show is composed of various musical parables from The Gospel According to Matthew, with Jesus Christ (Watervliet business major Coby Henslee, usually playing trumpet in various SMC bands) recruiting a group of followers and teaching them lessons through song and dance.

Conceived and originally directed by John-Michael Tebelak in 1971, with music and lyrics by Stephen Schwartz, the show employed the archaic English spelling for gospel, which means good news.

Director Tucker Curtis interprets today’s “Godspell” as a sort of pandemic parable about the two-year “come-to-Jesus” moment just lived through which tested faith, shattered community and piled up questions with few answers. Slowly, footing was found as we cheered and honored those who kept us going.

The disciples carry small suggestions of the brave essential workers from that time of uncertainty and rebuilding, putting faith in things learned as children: treat others as you wish to be treated, a light heart eases a heavy load, love thy neighbor.

When SMC staged “Godspell” April 6-9, 1977, it was performed in the gymnasium of the Charles O. Zollar Building because the theatre and the Lyons Building had yet to be built.