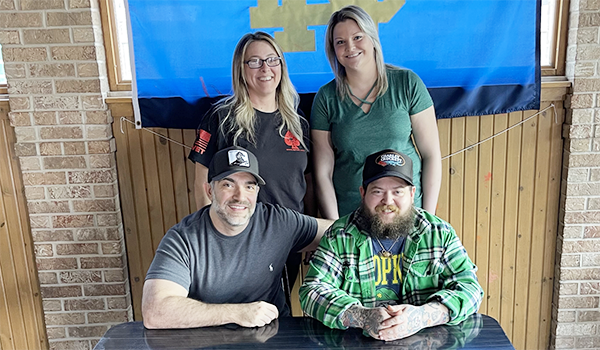 NILES — It has been 60 years since Jay’s Lounge first opened its doors near the Michigan-Indiana border.

The establishment has survived and adapted over the years to become one of the area’s most popular dining experiences, thanks to the vision of owner Silvio Martino and his dedicated staff.

“[60 years] is a long time,” Martino said. “Obviously, we’re doing something right. You constantly have to be changing. Business is good right now, so we’re in a good place.”

Jay’s Lounge was founded in 1962 by Jay Griffee and was later owned and operated by his sons Joe and Dave Griffee until Martino’s father Carmine purchased the establishment in 1990 and decided to keep the name.

Martino said his father’s initial interest in the bar came from an unlikely source.

Martino began working at the Jay’s as a high school student to help his father, who had to take care of his mother Maria who fell ill.

“I was basically running it as a kid,” he said. “In Michigan, the laws are that you can serve at 16 as long as the kitchen’s open. We would keep the kitchen open just so I could continue to work here. I didn’t have my license yet. I would close the bar and my sister would have to come pick me up.”

In 2008, he officially took over sole ownership. For Martino, Jay’s Lounge was an integral part of his life from a young age.

“A lot of the customers that still come in here, they saw me grow up,” he said. “For me, they were almost like adopted uncles and stuff like that. These were men that I looked up to growing up, nice people. I would like to think some of the closest friends that I have today are my customers here.”

Martino attributes the restaurant’s success to the work of his customers and staff. Many of his managers and staff have been with him for years and have a rapport with regular customers.

“I have the best staff,  I know a lot of people will say that but I truly believe it,” he said. “You see a lot of places like this that have a revolving door, we don’t have that here. The girls that work out front have been here for a long time. The people in the back have been here for a long time. … The success comes from within and any owner that tells you different it’s not telling the truth. Beer is beer, liquor is liquor and fries are fries. But it’s the face that’s bringing it to you that matters; It’s the atmosphere and that’s created by the people. I’m fortunate because they make me look good.”

The restaurant’s location near the state line has allowed it to keep a steady flow of customers.

“We’ve managed to take advantage of our location,” he said. “We get to do a lot with Notre Dame students. We get the best of both worlds, which helps us because when you’re on this side of the town, a lot of times you’re forgotten. There’s always so much emphasis put on downtown and it’s all about downtown, so a lot of times when you’re in this little corridor you’re easily forgotten all the time. I tell my workers we’ve gotten this far on our own with our loyal customers and what we do will continue to thrive on that.”

Jay’s Lounge has made the transition from a bar/grill to a bonafide restaurant in recent years, offering one the area’s most diverse menus. Chef James Brazo came to Jay’s Lounge from the University of Notre Dame and now runs the kitchen and has full creative control over the menu, which features a variety of burgers, sandwiches, salads, subs and more.

“It was the best decision that’s ever happened for me,” he said. “From that point on we became more of a restaurant/bar. People come in here all the time and are amazed at the type of foods that are put out because it’s just not what you normally expect in your traditional pub.”

Martino said he plans to offer some menu specials to celebrate the establishment’s anniversary. While he is not sure if he’ll be around to see Jay’s Lounge through to another 60 years, Martino is proud to be able to build on the legacy his father and the Griffeys have created.

“To say that you’re business is 60 years in and still doing really good means a lot,” he said. “I attribute it all to the, you know, customers and staff. I had good people. I don’t have any plans of doing anything else at this age. I’m gonna ride this out for as long as I have good people.”