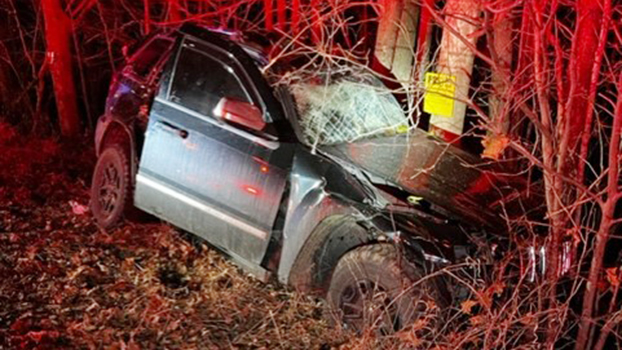 The Cass County Sheriff’s Office responded to a call at 10:08 p.m. to investigate a crash on M-40 south of Pioneer Street Thursday night. (Submitted photo)

MARCELLUS — A pair of Three Rivers residents were injured in a single-vehicle personal injury accident on M-40 in Marcellus Township Thursday night.

The Cass County Sheriff’s Office responded to a call at 10:08 p.m. to investigate a crash on M-40 south of Pioneer Street. Initial investigation shows that Three Rivers resident Linda Navarro, 33, was traveling south on M-40. The vehicle crossed the center lane, left the roadway and crashed into a tree. Three Rivers resident Felipe Navarro, 34, was the front seat passenger of the vehicle at the time of the crash.

Both occupants had to be extricated from the vehicle and were evaluated by emergency medical personnel. Linda Navarro was transported by MedFlight to Bronson Methodist Hospital. Felipe Navarro was transported by Air Care to Bronson Methodist Hospital. Seat belts were worn. It is unknown if alcohol, drugs or speed were factors in this crash. This crash remains under investigation.