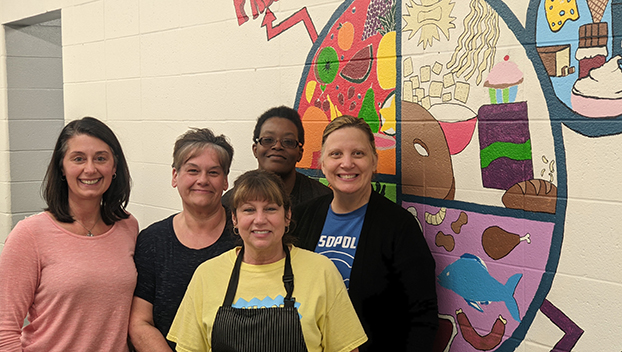 CASSOPOLIS — A local school district has issued a response after a viral Facebook post called into question the safety of its food services.

The district was inspected Tuesday by Richard T. Conway, a representative from the Van Buren/Cass District Health Department, to determine its level of compliance with the state.

According to a copy of the report obtained from the health department, Sam Adams Elementary and Ross Beatty Jr./Sr. High were found to be in compliance.

The central kitchen is located at the middle/high school. The majority of the district’s food is delivered, cooked and prepared there before being transported to the elementary school to be served to students, with select items transported directly to the sites to be served to the students. The district provides free dining services to its students.

“No violations were noted during today’s inspection,” Conway wrote. “Temperature checksheets show correct temperatures or above for the food cooked. I see no concerns with unsafe food handling.”

The Facebook post, posted March 10 by a former food services employee, consists of several images of foods taken by the former employee depicting what was described as examples of undercooked, overcooked and expired foods. The post received more than 100 “reactions,” 134 comments and 466 shares at the time of publication.

According to Food Service Director Heather Rigby, looks can be deceiving.

“With bone-in chicken, when you cook it, the bone marrow is going to cause a pinkness in the chicken,” she said. “That’s going to happen and kids aren’t used to that and I get that. It doesn’t mean we shouldn’t give them the opportunity to learn what that’s like. When you make chili or a spaghetti sauce with fresh hamburger, you’re gonna have some grease and it’s gonna settle to the top. You have to stir it back in. It looks different when you’re doing it that way.”

“We weren’t serving that fruit to students,” said Cassopolis Superintendent Dr. John Ritzler. “If you get moldy fruit that comes in, you don’t serve it. That fruit was set aside in favor of fresh fruit.”

The social media post was a bump in the road toward the district’s goal to serve fresh, non-frozen foods to its students via its “Back to Scratch” initiative.

The initiative was formed when Rigby came to the district prior to the onset of the pandemic.

“Our superintendent at the time was really excited about the idea of farm-to-school and school gardens,” she said. “We wanted to get back to preparing meals rather than going from the freezer to the oven. That’s when I created a tagline ‘Back to Scratch.’”

According to Ritzler, the health department told him that the district is one of just two in all of Van Buren County and Cass County trying to revamp its food services in this way.

“When I came on board and I learned a little bit about it, I was pretty excited,” Ritzler said. “I told her I don’t know of any other school districts that are trying to do that. I came from northern Indiana. Our health department guy covers Van Buren and Cass County and he said we’re one of only two school districts in both counties that are trying to make the effort that Heather’s making to be preparing fresh foods. I am excited about it.”

With students returning to school and restrictions reduced, Rigby was able to introduce Back to Scratch to the district this year.

“It’s been really exciting because we were able to really kick off that Back to Scratch initiative,” she said. “Some of the supply chain issues really kind of helped propel that. A lot of suppliers are pulling out of producing for schools and that really just propelled it because I was able to purchase fresh chicken breast and fresh ground beef when we couldn’t get chicken tenders or chicken nuggets or any of that sort of stuff.”

As part of the Back to Scratch initiative, Rigby said the district has added several fresh food options for students to choose from, including chef salads, chicken salads, subs and several types of fresh fruit and vegetables.

“We used to just have a hot option, a peanut butter and jelly option, a small salad and then yogurt,” Rigby said. “We’ve expanded that. … We want to provide you with meals that have more of a home-cooked feeling. All of the regulations that I have to follow can be challenging but also really exciting because you can naturally flavor things with fresh vegetables and marinades.”

Rigby said her staff has doubled in order to ensure the success of the program. According to her, it would not be possible without her team’s dedication.

“It’s all about the people,” she said. “Most schools have a hard time doing it because they don’t have the staff. What we’re doing takes a lot more work and it takes more people. My staff work harder than they ever have for us to be able to do this and provide the options that are healthier, cleaner and less processed.”

Rigby knew going in that growing pains would be involved in the process. Nonetheless, she strives toward her goal of providing students with a quality dining experience. In the future, Rigby hopes to work with area farms to provide local produce for students.

“I knew in doing this that it would be a years-long process to really get the kids feeling comfortable,” she said. “The high schoolers are probably the easiest. They’re loving all of the things that we’re doing. As we keep doing this and as they keep coming up through, the elementary students are going to know and be comfortable. It’s not easy in the beginning because students are like ‘I just want you to give me chicken nuggets and French toast sticks.’ We offer them those things but that’s not what we should be doing as our staples. I like to sprinkle in that fun stuff that is not as nutritionally sound.

“It’s a process to get them used to it but I’m confident that it’s worth it. It’s part of the process of learning about what fresh food looks like that they’re not maybe used to.”