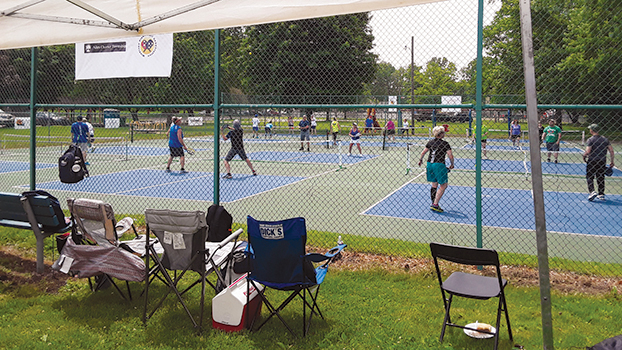 South Fireman's Park's pickleball courts have been a popular attraction since their debut in 2016. (Leader file photo)

NILES — New and improved pickleball courts will soon be on the way to a local park.

The Niles Township Board of Trustees unanimously agreed at its March 7 meeting to move forward with obtaining bids and verifying specifics for the South Fireman’s Park pickleball court project.

The project calls for the excavation and removal of the six damaged courts and the installation of brand-new courts with new nets and surfaces.

Niles Charter Township Park Board Chairperson Jill DeLucia is in the process of collecting quotes from contractors to submit to the board.

The five-year-old courts have received routine repairs each year, but due to harsh weather conditions, the courts have developed numerous cracks despite frequent use from pickleball players and park attendees. Pickleball is a recreational paddle ball sport that combines elements of tennis, badminton and ping-pong.

“I think [the project] is a good thing,” said Trustee Dan Pulaski. “They’re doing it in South Bend, Granger, they’re all over.”

The project has been in the works for months as the Niles Charter Township Park Board and Board of Trustees have worked out how the project would be funded. The Township will use a portion of its $1.4 million American Rescue Plan Act monies to fund the removal and replacement of the pickleball courts, while trustee members said local pickleball clubs have raised roughly $15,000 to pay for ancillary items for the space.

“We need to get going on it because the first reporting deadline for what projects we’re doing with ARPA funds is the end of April,” said Township Treasurer Jim Ringler. “For a long time, we didn’t know what we could use it on. We didn’t know the reporting requirements and all of that. A lot of that has come to light but honestly, we have to move on this.”

During a Nov. 15 township meeting, Paddletek co-owner Curtis Smith spoke about the impact the courts have had on his business.

“These courts have reached the mass market,” Smith said. “We have people that drive hours just to see our facility, and it’s not much to look at. They always ask where they can play around here and then we sort of embarrassingly say, well, there are these courts over here, but you have got Grand Canyons running through some of them, but you can go and demo the paddles.”