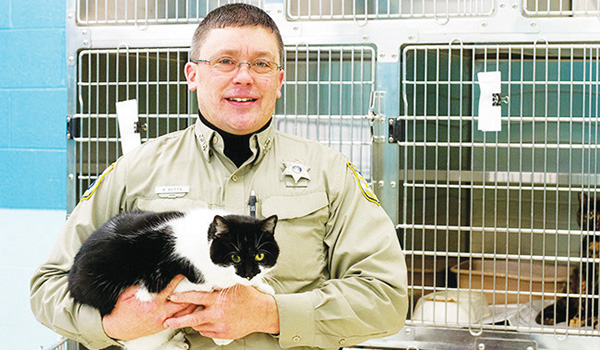 With assistance from Bergman Veterinary Medical Center in Cassopolis, Cass County Animal Control set up a mobile clinic where people could drive up with their animals and receive a vaccine. (File photo)

CASSOPOLIS — It wasn’t raining cats and dogs, but more than 100 animals descended upon a local event in February.

During the regular meeting of Cass County Board of Commissioners on Mar. 3, Cass County Animal Control Director Ronald Butts informed the board it vaccinated a record 137 animals for rabies – including four cats – at its latest drive-through clinic. He also urged residents to adopt from local shelters as ‘cat season’ approaches.

With assistance from Bergman Veterinary Medical Center in Cassopolis, Animal Control set up a mobile clinic where people could drive up with their animals and receive a vaccine.

“Big shoutout to Dr. [Kathleen] Murphy and her staff for helping with a record-setting event,” Butts said. “Some of the cats were even better-behaved than the dogs.”

According to Butts, cat overpopulation is a big problem not only in Cass County, but across the United States. He said the county shelter has a waiting list of about 200 cats, and urged residents to consider adopting locally if they are interested in a new pet.

“[Adoption is] kind of a focus point of the year,” he said. “Adoptions tend to slow down a bit in winter, which causes a lot of the shelters – as well as ours – to fill up during this timeframe. … Cat season is quickly approaching, so we focus heavily on spay-neuter assistance.”

The Cass County Animal Shelter issued more than $5,600 worth of vouchers for spay and neuter assistance, 90 percent of which was for cats, according to Butts. A single unspayed female cat, her mate and all their offspring can produce a total of 370,092 kittens in seven years, and the cumulative offspring of one female and one male dog can number well into the thousands in the same time period, according to the Michigan Humane society.

Commissioner Dixie Ann File said her daughter had adopted a cat from the shelter, and had a great experience.

“He’s passed away now, and their hearts are broken,” File said. “But that cat brought them so much joy and they loved him to pieces.”

Butts said those are the stories he likes to hear, adding they have a page on the Cass County Animal Control website to share such stories.  To share adoption stories, email photos and a story to ccac@cassco.org.

At the previous commissioner’s meeting on Feb. 22, the board authorized $991,493 in American Rescue Plan Act funds for the Cass County Road Commission. Road Commission Managing Director Robert Thompson thanked the commissioners at the Mar. 3 meeting.

“You cannot imagine … the impact that is having,” Thompson said. “You are not on the cutting edge; you are the cutting edge when it comes to working with the road commission and helping make up for the losses that [we] experienced through COVID.

Thompson said many of his colleagues asked how he made these funds happen, and he told them it was all the county’s doing.

“The county asked us for the numbers, they took the action and they deserve the credit,” Thompson said. “Great things like this start with an effort to build a working relationship. In Cass County, we’ve been very fortunate to be on a team that takes relationships very seriously. Because of that effort by all.  great things happen and the outcomes are what we want them to be. And so, I thank you for the consideration, the action and the difference that you’ve made for the road commission.”

Commissioner Jeremiah Jones brought up the issue of safety for road commission workers on the road, and asked Thompson if there was anything the county could do to improve their safety.

Thompson said safety is an issue, with traffic often not slowing down. He added there are options such as an extra trailer with a barrier, but they are very expensive.

“Maybe we could help,” Jones said. “That’s what we’re here for.”