He was born to the late Leo and Meta (Tabbet) Cusick, in Niles, Michigan just as spring was finally arriving on May 13, 1948.

While he was a young man in high school, a young lady caught his attention and shortly after graduating he asked Marilyn to be his forever love. 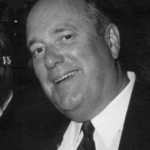 Roger graduated from Brandywine High School in 1966 and that same year he enlisted in the United States Air Force and served during the Vietnam Conflict securing the U.S. borders while he was stationed in Alaska.

At a ceremony in Niles, on Oct. 7, 1967, Roger wed Marilyn Mocherman who has remained his sweetheart for over 54 years. Upon completing time of service with the Air Force, Roger returned to Michigan where he worked for over 30 years in the service departments at local dealerships. He transitioned to Honeywell after being offered a position in their labs at the South Bend location and this proved to be a position that almost seemed like it had been created just for him.

Any chance Roger had, he loved to drop a line in the water, catching fish was wonderful but honestly any day where he was fishing was a good day. He took great pride in his 1953 Mercury Monterey, and he was an avid sports fan, rooting on his beloved Notre Dame athletes or enjoying a good Cubs game. Of all things in Roger’s life that he enjoyed, he absolutely adored his family. He loved any time they spent together, gathered around a table, outdoors on the front porch or out traveling whether by land or sea.

He is preceded in death by his parents and his brother, Gary Cusick.

Roger will be deeply missed by his wife, Marilyn Cusick of Niles, his children; Andrew (Beth) Cusick of South Bend, his daughter Amy (Casey) Gibson of Dowagiac and his grandchildren; Nicholas and Kaylen Gibson.

He will be laid to rest at Fort Custer National Cemetery in Augusta, Michigan in May and a Memorial Open House will take place later in the spring where his family and friends will gather and share memories of a life well lived.

Roger leaves a legacy of love, a wonderful sense of humor, and a love for his Lord.