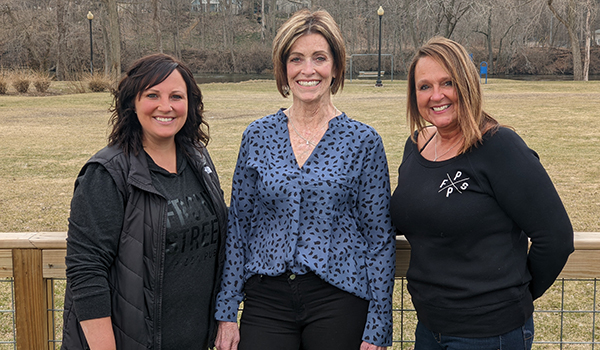 NILES — A local nonprofit is teaming up with an area eatery to raise funds to beautify Niles, one icy plunge at a time.

The River Essence Group and Front Street Pizza Pub, 510 N, Front St. have joined forces to host The Pledge To Plunge at FSPP. A month-long fundraiser competition, The Pledge To Plunge aims to raise money for REG projects. The REG is a nonprofit organization founded to enhance the economic and social vitality of the Niles community.

The fundraiser consists of eight teams competing to raise the most money by the end of the month. Each team has a dedicated “plunger” who will be dropped in a dunk tank as part of the event’s festivities from noon to 3 p.m. Saturday, April 2 at Front Street Pizza Pub.

The top three teams who raise the most money will plunge last. The MC and DJ for the event will be Allison Hayes and Rick Mckeel. Admission to the family-friendly event is $5 for the event, which will include hot dogs, music, the dunk tank and more, with proceeds going directly to the River Essence Group.

“We wanted to pull from all areas of the community to try to get different organizations and different groups of people battling against each other,” Martin said. The event here at Front Street is more just to celebrate what we have raised and actually have something fun. I feel like that’s what we have been missing in the city of Niles is actually being able to have fun. We’re allowed to have different opinions and we have our different goals but here we are all coming together for one common goal to bring the beauty back to Niles.”

According to Front Street Pizza Pub General Manager Sarah Martin, she and Vikki Jurgonski, president of River Essence Group, discussed creative ways in which the REG could generate funds for projects this year.

“Funds are one of those things that is always hard to come by,” she said. “We were thinking outside the box in ways that we can help raise money and splitting into teams was a way to do that.”

Participating teams and their Plungers are as follows:

Donations can be made at any of the above businesses or by sending it thru Venmo @riveressencegroup with the team you want to support listed in the comments. Checks can be made out to River Essence Group and dropped off to Front Street Pizza. Groups wishing to participate in the contest can do so with a $100, which allows a group to plunge a person of their choice into the dunk tank.

Martin appreciates the work REG does every year and is hopeful the fundraiser will be a success.

“It means a lot when you see the actions of the River Essence Group and how much passion they put into it,” she said. “ I want to help them because you see the difference it makes in how much nicer it is to walk downtown and of the different little things that they try to do to bring out the niches that are special to a small town like Niles.”

Jurgonski is thankful to everyone involved in making the fundraiser happen. She said her current focus is to use the funds raised to commission mural paintings downtown. Other projects are in the works as well.

“We have some great plans that are going to take some money,” she said. “But we want to do them. We think these projects will make a difference.”