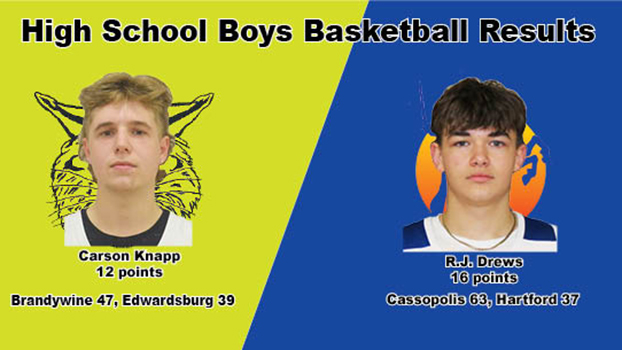 Brandywine had to rally from a 21-7 first-half deficit to defeat visiting Edwardsburg in a game between a pair of division champions Tuesday night.

The Bobcats, winners of the boys BCS Athletic Conference Red Division, used a 17-0 run in the second quarter to turn a 14-point deficit into a 28-23 halftime advantage. In the process, Brandywine won its seventh consecutive game and 10th out of its last 11.

The Bobcats (13-4) will wrap up the regular season Thursday night against Lakeshore.

The Eddies (14-4) have won seven out of their last 10, but lost two of their last three games heading into the Wolverine Conference championship game against host Otsego Thursday night.

After losing the lead, Edwardsburg could never recapture the formula that helped them build it. Turnovers were a key as the Eddies committed 23 of them, which led to easy baskets for the Bobcats.

Jake Moore led Edwardsburg and all scorers with 16 points. No other Eddies reached double figures.

After a 1-4 start under first-year Coach Jared Rusher, Cassopolis has now won 15 consecutive games heading into the postseason.

On Tuesday night, the Rangers capped off the regular season with an easy 63-37 win over visiting Hartford in a Southwest 10 Conference contest.

It was all Cassopolis in the final 16 minutes of play.

Davion Goins and R.J. Drews scored 16 points to lead Cassopolis, which got 13 points from Daeton Gillam.

Kaden Johnson had a game-high 24 points for the Indians.

The Rangers will now turn their attention to the Division 3 District Tournament at Buchanan, starting Monday. Cassopolis faces Bridgman in the opening game of the tournament.

Buchanan, which lost its first four games before putting together a nine-game winning streak, ended its conference season with a 62-50 BCS Red Division win over South Haven.

The Bucks are 2-2 in their last four games. On Thursday night, Buchanan will wrap up the regular season against Parchment (18-1).

Against the host Rams, Buchanan jumped out to a 20-9 first-quarter lead and were never challenged the rest of the way. The Bucks led 34-20 at halftime and 50-35 after three quarters.

Ryan Young, the area’s leading scorer with an average of 22.4 points per game, scored a game-high 29 against South Haven. Macoy West added 14 points.

Damon Jackson had 14 points for the Rams, who also got 12 points each from Demonta Hudson and Elliot Williamson.