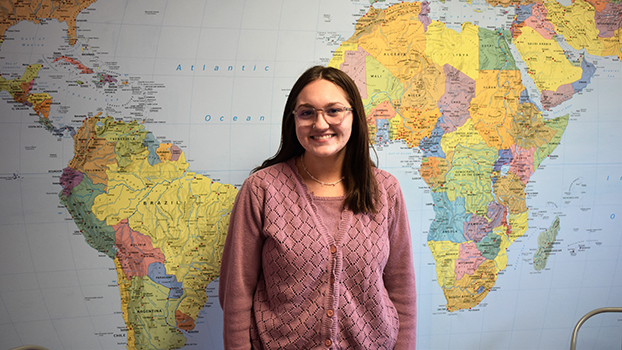 Palmer graduated from Dowagiac High School in 2021, and attends St. Mary’s College in Notre Dame, Ind. In addition to being a pre-law student, Palmer intends to major in political science and dance, with a minor in social work. She also is the captain of the cheerleading team and involved in groups ranging from investment club to women’s issues non-profit organizations. (Ryan Yuenger / Leader Publications)

DOWAGIAC – If one were to ask this year’s Miss Heart of Blossomtime winner to recite the U.S. Constitution, not only could she do it, but she might be enthused to do so.

Dowagiac graduate Taylor Palmer was crowned Miss Heart 2022 on Saturday at Lakeshore High School and will compete with other area finalists at the Miss Blossomtime Pageant on April 25. While she didn’t expect to win the competition, she had a plan of action — be authentic.

“I just wanted the judges to know that I was being real,” said Palmer, who graduated from DUHS in 2021. “I was just me, and that’s all that mattered. It didn’t matter if I won as long as I just went out there and was myself … and then I ended up winning. I was so surprised, so thankful.” 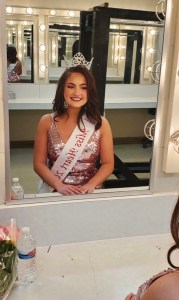 Dowagiac graduate Taylor Palmer was crowned Miss Heart 2022 on Saturday at Lakeshore High School, and will go on to compete with other area finalists at the Miss Blossomtime on Apr. 25. (Submitted)

Palmer graduated from Dowagiac High School in 2021 and attends St. Mary’s College in Notre Dame, Indiana. In addition to being a pre-law student, Palmer intends to major in political science and dance, with a minor in social work. She is also the cheerleading team’s captain and is involved in groups ranging from investment club to women’s issues non-profit organizations.

“You name it, I’m there,” said Palmer, adding she already has a plan for what the rest of her career is going to look like. She said she wants to attend Columbia Law School in New York, then work as a family law and divorce lawyer, eventually starting her own practice. Finally, she intends to become a United States Supreme Court Justice.

“Growing up, my grandfather was super involved with politics,” she said. “We would watch the news all the time, and, growing up, I was informed of these things. Right from the get, I had a love and a passion for that.”

Palmer said her grandfather died shortly before her senior year of high school, and his death made her even more sure of her path.

“I think it made me realize, yes, this is exactly what I want to do,” Palmer said. “I love history classes. I love law classes. I could probably recite the whole U.S. Constitution if I really wanted to. It’s become my entire life.”

Palmer said she was also inspired by a quote attributed to former Supreme Court Justice Ruth Bader Ginsburg, “Speak your mind, even if your voice shakes.” The original quote is from activist Maggie Kuhn, of the elderly welfare group Gray Panthers.

“I have a big personality, and I’m big on speaking up for what I believe in,” Palmer said. “That quote helped my drive to want to do that.”

Palmer said she has already had to use her voice to defend her beliefs.

“I was told because I’m a woman, I can’t go into law, and I won’t be able to go into politics,” she said. “At first I was like ‘what did you just say,’ but then I took that anger and frustration, and I use that to not only motivate me and drive me, but to empower the younger generation so they can also speak up for what they believe in.”

While she did not start participating in pageants until 2019 – when she won Miss Teen Lake Michigan — Palmer said she enjoys competing because of the female empowerment aspect of the pageants, not necessarily the ‘beauty’ aspect.

“Seeing women and their community service, that’s a big thing,” Palmer said. “Even if some of it is about beauty, not everything is. It’s all about what you do for the community, how you are involved and what makes you different. It doesn’t matter your race, your size, if you have acne, what color your hair is — you can, too, run for pageants. … Knowing I can be myself and not feel like I have to fit into a certain standard, that is what keeps me going in pageants.”