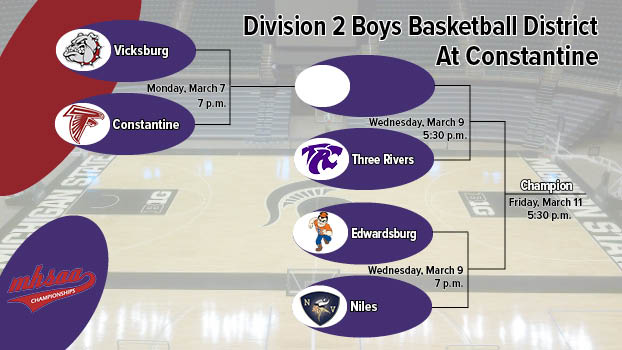 For Edwardsburg and Brandywine, coaches Steve Wright and Nathan Knapp better not hope so.

The Eddies (13-5) and Bobcats (13-4) were awarded No. 1 seeds for the upcoming boys district basketball tournament. While that might sound like a good thing — not having to play on the opening night — it did not do them any favors when it came to their semifinal opponents.

“The Wolverine Conference is extremely competitive,” Wright said. “Teams are tough, physical and very talented. Any time you can get out of conference play 11-2, and receive a favorable seeding in the tournament, that is quite an achievement. However, once the play begins in March, seeding won’t matter. Everyone’s record is 0-0, and we have to play at our highest level each game in order to advance.

“Having a district with so many conference teams is extremely difficult. We all know each other well; what the tendencies are, and philosophies. We will need to play very well to have a shot against Niles.”

Should Edwardsburg get by the Vikings and advance to the finals, it appears that a third meeting between it and the No. 2-seeded Three Rivers Wildcats could be waiting. Edwardsburg split its Wolverine Conference South Division games against the Wildcats, winning 62-54 in December, but losing 68-52 in January.

Three Rivers will play the winner of the Vicksburg-Constantine game, which kicks off the district March 9. 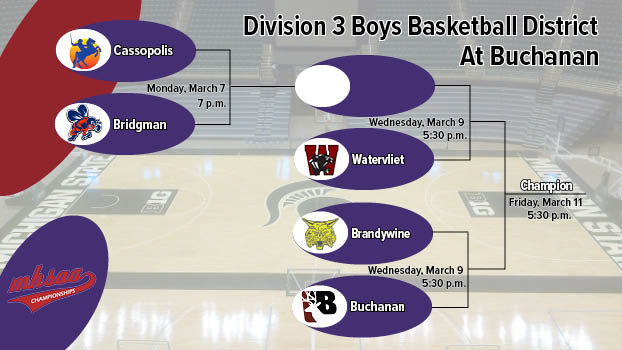 The Bucks are hoping that the home-court advantage will pay off, especially in its opening game against the district’s No. 1 seed Brandywine.

The Bobcats (13-4) won the BCS Athletic Conference Red Division, in part, by sweeping the Bucks during the regular season. Brandywine has won seven consecutive games and 10 of its last 12 as it heads into the final week of the regular season.

“Buchanan at Buchanan is always tough,” Brandywine Coach Nathan Knapp said. “They are well coached, and it is tough to be a team three times in the same year. If we split during the regular season, I would probably feel a little better going into it. It is just tough.”

Knapp said you can throw out the seeding when it comes to March.

In the other half of the bracket, the red-hot Cassopolis Rangers (15-4) will face Bridgman (12-7) in the opening game of the district March 9. The winner advances to face No. 2 seed Watervliet (15-3) in the other semifinal March 11. 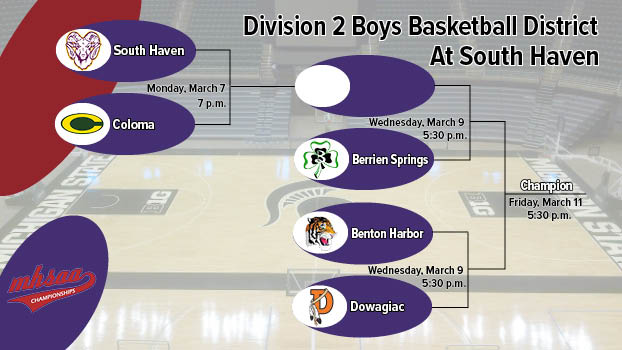 There is an old saying among coaches that teams cannot win a championship in the first game of a tournament, but they can lose one.

That might now hold true at South Haven, where Dowagiac will take on the No. 1 seed in Benton Harbor in its opening game — the semifinal March 11. A win over the 16-2 Tigers would put the Chieftains in the driver’s seat when it comes to winning the district championship.

In the other half of the bracket, the host Rams (4-14) will face Coloma (8-11) in the district opener March 9. The winner advances to face the No. 2 seed, Berrien Springs (9-9) in the other semifinal.