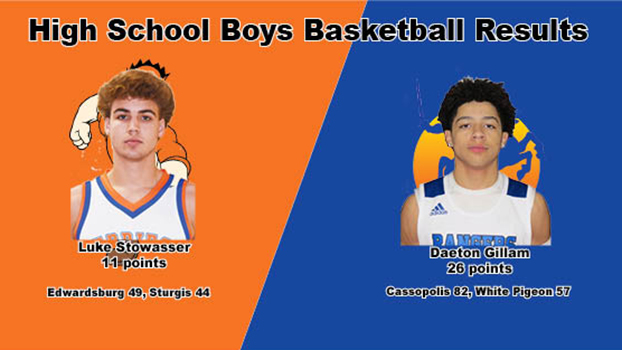 THREE RIVERS — It was not easy, but the Edwardsburg boys basketball team locked up the Wolverine Conference South Division championship and a spot in the league championship game with a 49-45 win over host Sturgis Friday night.

Despite a sub .500 record, Edwardsburg was not taking the Trojans lightly. After all, it was Sturgis that knocked Three Rivers out of a first-place tie with the Eddies with a 56-40 victory Feb. 11.

The Trojans put the pressure on the Eddies in the opening half, leading 14-12 after one quarter and 24-22 at halftime. Sturgis took a 36-31 lead into the final quarter, but could not stave off an Edwardsburg outscored the Trojans 18-8 in the final eight minutes to pull out the victory, thanks in part to Luke Stowasser and Jacob Pegura. Stowasser scored seven of his 11 points in the fourth quarter, while Pegura scored six of his eight points.

Respectively, Jake Moore and Isaac Merrill chipped in with 10 and eight points to help Edwardsburg advance to the title game.

J.J. Smith had a game-high 17 points for Sturgis, which also got 15 points from Jacob Thompson.

The Rangers jumped out to 21-10 lead after the opening quarter. Cassopolis poured in 20 more points in the second quarter to increase its advantage to 41-19 at halftime.

The Rangers scored 41 points in the second half as well, while White Pigeon played better offensively and scored 38 points.

The fourth quarter saw the two teams trading 3-point baskets from all over the court as the two teams combined for 19 triples, with the Rangers getting the better of it with 12 3-pointers.

Daeton Gillam led Cassopolis and all scorers with 26 points, while Reggie Hart added 17 points and R.J. Drews with nine points.

The Dowagiac Chieftains continued to play shuffle the lineup as it took on host Paw Paw in a Wolverine Conference non-divisional contest Friday night.

Due to injuries, illness and suspension, Dowagiac has rarely played the same starting lineup the second half of the season, and Friday night was no different.

While the Chieftains got Cole Weller back into the starting lineup, Jordan Hardin had to sit out the game due to a suspension. To compensate for the loss, Dowagiac brought up junior varsity players Ado Geegan and Johnnie Cole, who were able to play in the varsity contest due to the fifth-quarter rule.

The Chieftains (11-8) got off to a quick start as it opened up a 19-9 lead after one quarter. The Red Wolves (2-17) could never mount a serious threat over the final three quarters.

Henry Weller, southwest Michigan’s second-leading scorer, poured in a game-high 31 points to lead Dowagiac and all scorers. The Chieftains also got six points each from Cole Weller and Mason Peck.

Dowagiac will host Plainwell in its Wolverine Conference crossover to end the regular season Thursday night.