Hood picks up 400th career win as Bobcats down Lawton 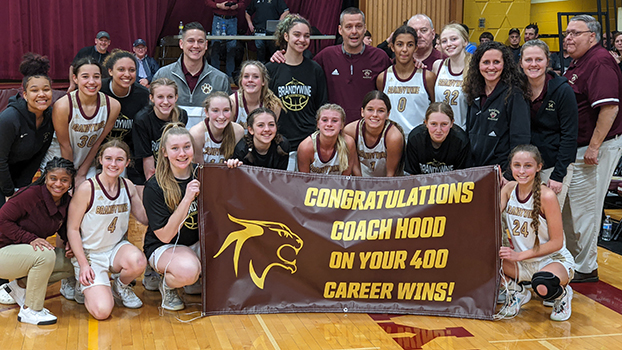 NILES — It took one game longer than Brandywine Coach Josh Hood would have liked it to, but the veteran Bobcat girls basketball coach earned career victory No. 400 as his squad defeated Lawton 39-25 Tuesday night.

The Bobcats, ranked No. 6 in the latest poll, would have liked to have celebrated the milestone victory Monday night when it took on archrival Buchanan in a battle for first place in the BCS Athletic Conference Red Division.

The Bucks upset the Bobcats 42-36 to earn at least a share of the division championship. Brandywine can wrap up its share of the title with a win over South Haven Thursday night. In between, the Bobcats had to regroup and focus on beating Lawton and getting ready for the Rams. 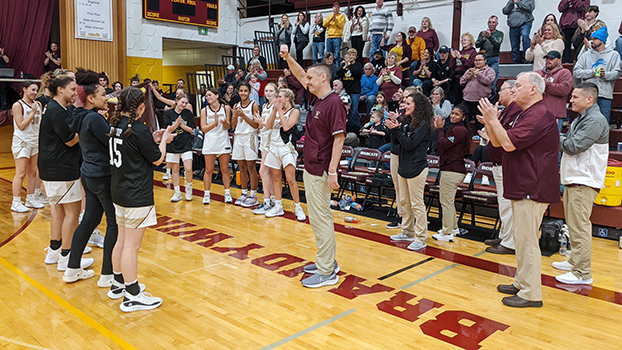 After a sluggish start, which saw both teams struggle offensively, Brandywine got rolling in the second half and pulled away to give their head coach, who is now in his 20th year of coaching, that defining victory.

Hood, 44, is in his 13th season of coaching the Brandywine girls basketball team. He took an up-and-coming program, which had just come off a district championship, and turned it into a state power. Since he became the head coach in 2009, Brandywine has posted a record of 274-31, which includes 10 district championships, seven regional titles and a pair of trips to the state semifinals.

Hood is proud of those numbers, but is quick to point out that you do not achieve that kind of success without great players and assistant coaches.

To get to that magical 400-win total, Hood was 8-13 his one season of coaching girls at Coloma and 54-16 as the Comets’ boys coach for three seasons. Hood coached both the boys and girls teams for one year at Coloma.

He then went to Cassopolis to take over the Rangers’ boys basketball team. At Cassopolis, Hood was 63-30 in four seasons.

Hood said he does not spend much time reflecting on the number of wins his teams have piled up. He will leave that for when he retires somewhere down the road.

And then there is the late Mahlon Lowery, who died in 2009, but has left a lasting mark on the Brandywine program.

“I have been lucky everywhere that I went,” Hood said. “You look at my good friend Mahlon Lowery, who always told me to surround myself with a good group of people. It started in my Coloma days with Nate Knapp and Brent Nate. The next year we got Matt Brawley to join us, who is the athletic director at Niles, and Mahlon, obviously, who was the most knowledgeable person I had ever met.

“Then you move on to Cass, and you have the Ricky Evans of the world, who is just phenomenal. Now, I come back here and you get Frelen Gowen and Kalie Wieger. Then you have former players like Tammy and MacKenzie. You have Dave Roeder, who was a final four coach and a college coach. A long time from now, when I can finally sit back and reflect on it, it will be exciting to think about that amount of wins. But it is not about me. It has been about a great network of people have worked really hard to build our program.”

Nate, who was there from the beginning, calls Hood one of the best, if not the best, coach in the area.

“What do you say?” Nate said. “He has had success at every level, boys and girls, and at multiple schools. He is a tireless worker who has put in the time to make it great. He has built programs. You cannot say enough good things about him. I hate to say it.”

Looking back at that original staff, Nate said they were not only trying to build something special at Coloma, but were all friends who enjoyed working together.

“It was fun,” he said. “Going back to the first varsity season at Coloma in 2003 and winning the regional. It was a magical run, and we valued it because we knew it didn’t happen everywhere. The way the community and the school support that team and us coaches was great.”

Even Hood’s archrivals admire how he works and how his program conducts itself.

“Josh is an extremely detailed and knowledgeable basketball coach,” said Buchanan Coach Gabe Miller, whose team kept him from reaching his milestone Monday night. “His ability to maintain the standard he has established at Brandywine is a testament to his drive and determination. Over the course of the last eight or nine years I have been coaching at the varsity level, his team’s effort, tenacity, conduct and sportsmanship on the court have always represented the Brandywine community well. More importantly, I would assume in the game of life; his athletes have been better served playing for such a determined and committed coach.”

The final numbers from Tuesday night’s win will read that the Bobcats improved to 17-2 overall with the 14-point victory.

Brandywine will now set its sights on win No. 401, which would produce yet another conference championship and another number to put on the banner.

“Right now, our focus is on beating South Haven and getting a share of the conference,” Hood said following the loss to Buchanan Monday night. “At Brandywine, we are all about lowering that banner and adding another number to it.”