‘Together we can stand’: Dowagiac school board calls for unity after superintendent evaluation decision 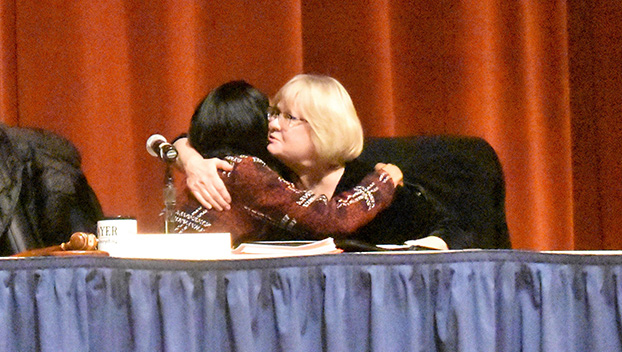 DOWAGIAC — The Dowagiac Union School Board has come to an agreement regarding the evaluation of Superintendent Jonathan Whan, and now its members seek to move forward in a new light.

The board voted 5-1 on Monday to approve an “effective” overall rating for Whan. Terms of the agreement include a 3-percent salary increase calculated from the second half of the 2020-21 school year, as well as the removal of a one-year contract extension connected to the rating. Whan’s contract is set to expire June 30, 2024.

Brewer said he supports the decision to remove the contract extension, as well as “improved goals and a mentor,” but could not in good conscience support an effective overall rating.

“Throughout this past year, this district has struggled in many facets, and we have a lot of work to do,” Brewer said. “In order for our district to move forward and truly become Dowagiac United, I strongly believe that our vision for the future has to be a collective one. One that includes active participation from the board, from the superintendent, teachers, staff, students, parents and the community.”

The evaluation, which was supposed to have taken place by Jan. 31, 2021, per Whan’s contract, was delayed by a months-long saga of teacher contract negotiations. When it came time for Whan’s evaluation on Jan. 17, the five-hour closed session ended in a split vote.

Sullivan, who voted “no” after the initial evaluation, said Whan was open to board feedback during the evaluation.

“We used the word ‘reset,’ a lot during those conversations … so I’m looking at this as a reset,” Sullivan said. “I look forward to how we can move our district forward and make our students our number one priority.”

As teacher contract negotiations continued, Whan and the board drew criticism from teachers, former teachers, parents, students and community members. The strain of the proceedings showed during multiple public meetings, with emotional speeches becoming a regularity during public and board comment periods.

“The last six months have been pretty hard on all of us,” Groth said. “In my 40 years, basically, of living in this community, I’ve never seen it this divided. It really hurt to see that I may have contributed a little bit to it — I think we all contributed to it.”

As board members took turns speaking Monday evening, several voices cracked with emotion. Some read from prepared statements, and some spoke freely, but one theme was consistent: Unity.

“I’ve been a Chieftain all my life. I guess you could say I bleed orange and black. This community and this school district means a lot to all of us,” Ausra said. “The board, administration, staff, students and community, we all need to work together. … We do want to hear from you. Let us know what’s working in the district, and what we can improve on. Together, I believe great things will be happening in our Dowagiac schools.”

Ausra, on behalf of the board, also thanked Sullivan for her work as president.

“She is absolutely amazing,” Ausra said. “She works many hours to make sure all the i’s are dotted and t’s are crossed. She always gets information to us promptly and accurately. We truly appreciate her leadership.”

After Ausra and Sullivan embraced, Hatcher took a moment to thank Dowagiac teachers.

“I’ve learned that you don’t know how it is to be a person unless you walk a mile in their shoes,” Hatcher said. “I haven’t walked in your shoes, but I really want to say I appreciate the hard work and dedication. … I truly believe that we as a community need to be the example to the young people that’s coming up under us. We need to know that we will have disagreements — and we can disagree, but we don’t have to fall out. We can still unite and become as one, and together we can stand.”