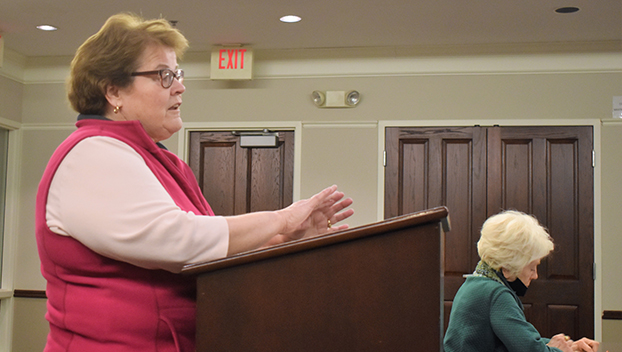 DOWAGIAC — One local woman and her family are fed up with their neighbors, and want the city to know about it.

At the regular Dowagiac City Council meeting on Monday, resident Mary Parmley spoke to the board on behalf of her daughter, Kelsey Parmley, regarding what she called incessant drug activity in the house at 509 1/2 N. Front St., Dowagiac. Kelsey Parmley and her fiancée, Jessica Burger, live with four children at 509 N. Front St., and share a driveway with the house in question, and often are disrupted by the activities of its residents and visitors.

“There’s a big problem,” said Mary Parmley, a lifelong Dowagiac resident who lives around the corner on E. Prairie Ronde Street. “As a mother and a grandmother, it scares me to death what is happening there and keeps happening. Kelsey said they’ve had five-plus drug busts, but I think it’s more than that.”

After a 2015 incident, 509 1/2 N. Front was declared a clandestine drug lab by the U.S. Drug Enforcement Agency. As recently as Tuesday, Feb. 8, there were multiple methamphetamine-based arrests made at the home by Cass Country Drug Enforcement Team.

Dowagiac police logs confirm another meth bust in April 2021 on the 500 block of N. Front Street, and the block makes regular appearances in the Dowagiac Police Department police blotter.

“It’s there,” said Mary, of where on the block the reports are from. “It’s a drug house. It’s not a secret … people are back there all the time, stealing from them, destroying their property. They’ve had to bring their kids inside because there are drug deals going down.”

“They have not bonded out, thank god,” Mary said. “Both are frequent flyers with meth and assorted other illegal things. … They’ve had five overdose calls in probably the past three months.”

According to Mary, Burger sometimes can’t leave for work in the morning because there is a fire truck or ambulance there for an overdose call.

“Sometimes people come to her back door in various states of [intoxication] – and it’s not alcohol – looking for the occupants of the back house,” Parmley said. “My grandbabies live in there.”

Dowagiac City Manager Kevin Anderson told Mary Parmley the city and its police department are aware of the situation, and the city has turned some matters over to a city attorney.

“I appreciate you bringing this forward, and we understand the real difficulties that are going on there right now,” he said. “We know the things your daughter has done have been extremely helpful in the matter, too. … We only have intentions of escalating our efforts to make this right.”

Mary Parmley said her daughter has purchased an adjacent empty lot, and also would be interested in purchasing 509 ½ N. Front St. should it become available. According to Michigan House Bill 4001, civil asset forfeitures for crimes involving controlled substances are prohibited unless a criminal proceeding is completed and the defendant is convicted or pleads guilty.

Mary Parmley said she just wants her child and grandchildren to be safe.

“I pray every night that someone doesn’t get shot,” she said. “Because when they’re on meth, people are crazy.”