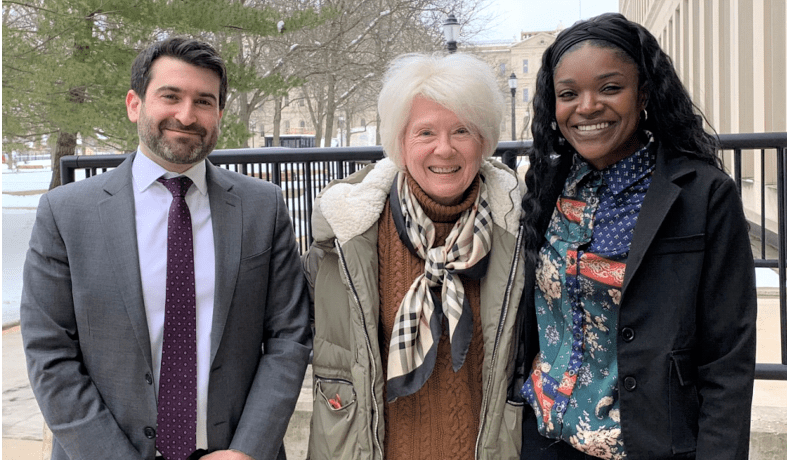 DOWAGIAC — One local government official is looking to clear the air on a hotly-debated topic ahead of the 2022 election season.

Dowagiac City Clerk Patty Patano met with Michigan Bureau of Elections Director Jonathan Brater and Election Security Specialist Ashiya Brown in Lansing Feb. 7 to discuss election security concerns that have been raised by residents in the wake of the 2020 presidential election.

“I wanted to bring some questions that I’ve seen come across social media and in the news and get a better picture of how to respond to some of those issues,” said Patano, who intends to organize a public forum in Dowagiac on election security in the coming months.

According to Patano, Brater and Brown helped her strategize the best way to communicate to residents the safety of Michigan elections.

In Michigan, paper ballots are scanned by machines and counted electronically. Public testing of voting machines is conducted before each election, and election precincts are open to the public for observation. According to the Michigan Bureau of Elections, more than 1,500 local clerks help to safeguard against state and even county-wide problems, as errors or breakdowns can be confined often to local jurisdictions.

In addition to security at the polling place, the state has adopted many national best practices, including upgrading voting technology, completing risk-limiting audits, hiring a full-time election security specialist and more.

“Michigan is one of the safest places to vote in the country,” Patano said. “We use paper ballots. Paper can be counted.  There is paper back up for all votes.”

On Sept. 30 of last year, Governor Gretchen Whitmer vetoed a bill prohibiting connection of the electronic voting system and electronic poll book to the internet on election day. According to the Bureau of Elections, voting machines cannot be connected to the internet during ballot tabulation. Only after counting is finished and a paper record has been generated will some jurisdictions connect the machines to the internet to send unofficial results to the county clerk.

According to an independent analysis by House Fiscal Agency, Governor Whitmer vetoed the bill because it was intended spread disinformation about the 2020 election. Specifically, she pointed to the bill’s implication that electronic poll books were connected to the internet and vulnerable to tampering, when they were not.

Patano said she has seen some misinformation being spread on social media, and wants to address people’s concerns before election season.

“The public is putting attention on it, politicians are putting their focus on these issues, and I want to be able to address them,” Patano said. “I’d rather have people address, specifically, those issues to someone who can answer them. I would also encourage them to become a part of the process because we’re always looking for election inspectors.”

Patano stressed that no ballot being questioned is looked at by people from just one political party.

“Say a ballot gets stuck in the machine and it has to be pulled out,” she said. “That’s not done by one person or done in a vacuum, that’s done by a Republican or a Democrat or election inspectors who take turns reading the information to each other.”

During the public forum – which has yet to be scheduled due to COVID precautions – Patano plans to explain to residents the process in more detail, to increase public knowledge of the election process.

“People who have questions and issues about the security of the process, I really encourage them. to try to do whatever they can to become a part of the process and become an election inspector,” she said. “They can see that the people that are participating really take that job seriously. … The checks and balances are remarkable, and should give every person a reason to feel secure and in the process.”