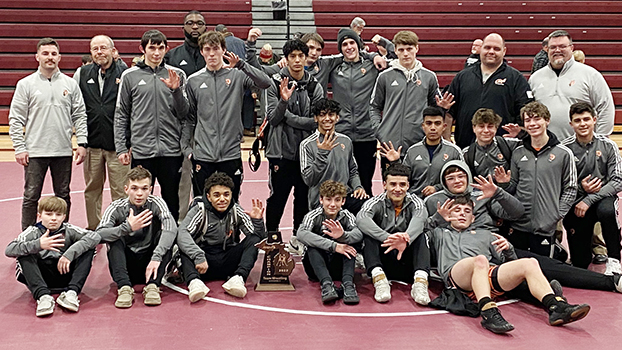 BUCHANAN — The saying goes the fifth time is the charm.

Okay, maybe that is not how it goes, but the Dowagiac wrestling team will understand.

“We did okay,” said Dowagiac coach Colin Burandt. “There are some things we have to improve on for Saturday and before next Wednesday, but it’s all about getting the job done in the end, and we took care of business.”

The Bucks defeated Berrien Springs 54-21 in the tournament’s first round before falling to Dowagiac.

“We fought hard,” said Buchanan coach Andrew Riggs. “We certainly tried to get off our back when we could, but we didn’t have everything we needed tonight. We certainly were not up to the task as much as they were, but you got to give them credit, they’ve got a tough team. We wish them luck in the regional, and we’ll move on to individual districts.”

“Munson bumped up a class and wrestled well,” Burandt said. “Our 130-pounder, Israel Villegas wrestled well. We had our third-string 119-pounder Cody White step in at 125 and did a fantastic job pulling out the win.”

“For the most part, tonight kind of went how we felt it would,” Riggs said. “There were a couple of swing matches there that didn’t go in our favor like we thought.”

Riggs was proud of how his team handled adversity this season to win a BCS conference title.

“If you have seen where we were at the start of December versus where we are now, it’s a completely different team,” he said. “They wrestle their hearts out, and you know I get them credit for it. We had guys that got pinned and girls that got pinned. Those things are gonna happen, but it wasn’t because they gave up. They continued to fight.”

While the Bucks’ team run stopped Thursday night, members of the team will be competing in the Division 3 individual district wrestling tournament Saturday at Otsego High School, as will Dowagiac.

The Chieftains hope to compete for a regional championship next week.

“We’ve gotta wrestle well throughout and do our job in every single weight class,” Burandt said. “We have to eliminate the mistakes.”