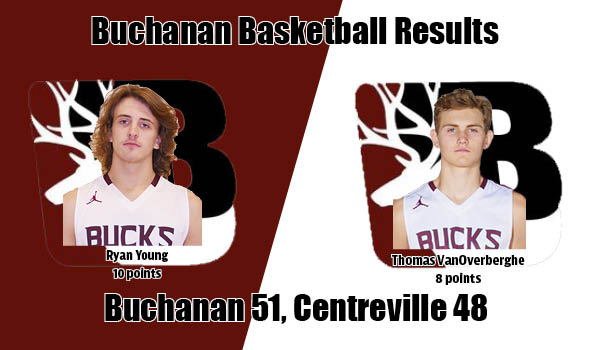 BUCHANAN — The beat goes on for the red-hot Buchanan boys basketball team.

The Bulldogs came to Buchanan having lost just one of its first 11 games this season. Buchanan, which started the season 1-5, has turned things around as it improved to 9-5 on the year with the win.

The Bucks’ Ryan Young, the area’s top scorer with an average of 23 points per game, scored a game-high 19 points to lead Buchanan, which also got eight points from Thomas VanOverberghe six points apiece from Connor Legault and Macoy West.

Centreville was led by Tyler Swanwick and Roman Robinson with 11 points each.

The Bucks are back in action Wednesday night as they host Eau Claire.

Breaking and entering arrest made in LaGrange Township