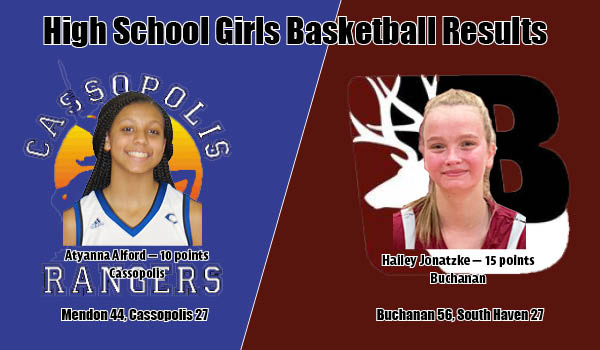 The Bucks defeated visiting South Haven 56-27 in a contest that was decided by halftime. Buchanan led 29-7 at the break as it improved to 13-2 on the season and 4-1 in Red Division games.

Yuma Doi had seven points to lead the Rams.

Buchanan returns to action Monday when they travel to Stevensville to face Lakeshore in a non-conference contest.

Host Mendon outscored the Rangers 18-5 in the first quarter and never looked back in a 44-27 Southwest 10 Conference victory. The loss was the second straight for Cassopolis against the conference’s top teams.

Visiting Southwest 10 Conference co-leader Hartford held Marcellus to seven first-half points on its way to an easy 61-28 win over the Wildcats Friday night.

The Indians (12-2, 11-1 Southwest 10) exploded for 25 points in the opening eight minutes to grab a 25-2 advantage. Even though Hartford scored just nine points in the second quarter, the Indians led 34-7 at halftime.

Marcellus (8-6, 6-6 Southwest 10) scored 21 points in the second half, but could not overcome the first-half deficit.

Khashya McCoy scored a game-high 18 points for Hartford, which also got 17 points from Alexis Snodgrass.