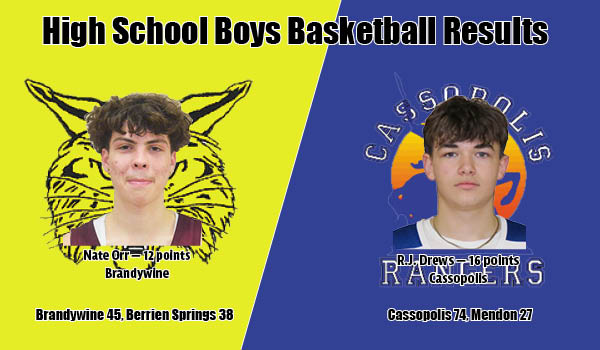 BERRIEN SPRINGS — The battle for first place in the BCS Athletic Conference Red Division lived up to its billing as visiting Brandywine was able to grab the early lead and then hang on for a 45-38 victory over Berrien Springs Friday night.

Brandywine grabbed a 10-7 lead after one quarter, and then slowly pulled away from Berrien Springs. The Bobcats increased their advantage to six points, 21-15, by halftime, and was able to maintain that six-point lead throughout much of the third quarter.

Berrien Springs outscored the Bobcats 17-15 in the final eight minutes, but could not overcome the nine-point deficit it dug itself in the third quarter.

The Bobcats are off until Thursday when they hit the road to face Elkhart Christian Academy.

Over the course of their winning streak, the Rangers are averaging 61 points per game.

The Rangers outscored the Hornets 25-8 in the second quarter to take a 41-23 halftime lead. Cassopolis then held Mendon scoreless in the third quarter to increase its advantage to 64-23.

Luke Schinker and Gabe High both scored 10 points for Mendon.

The Rangers are back in action Tuesday night as they host Decatur in a Southwest 10 Conference contest.